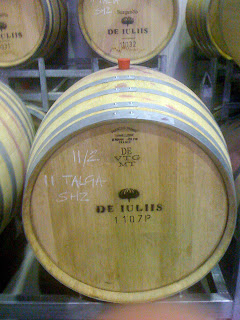 You’ll have to forgive the volume of Hunter Valley love on this site at the moment, but I seem to be surrounded by everything Hunter at the moment. That includes both a solid flow of good Hunter vino coming through my door, plus a Hunter themed function or too and topped off with a quick detour to the valley that happened over the weekend.

Whilst said visit was ostensibly focused on the more touristy side of the Hunter Valley – fudge factories, Smelly Cheese shops etc. – I did managed a quick whip through of the wines from two new-gen Hunter producers, namely Meerea Park and De Iuliis, with both Garth Eather and Mike De Iuliis respectively on hand to talk us through their vino.

Now quite a few wines did follow me home from the Hunter, and I’m going to write them up (eventually), but until I do, here is a quick wrap up of some of the pertinent points.

Meerea Park
On current vintages: The boys (Meerea Park is run by two brothers, Winemaker Rhys and General Manager Garth Eather) echoed many local sentiments by mentioning how confident they are with the ’11 fruit. It will be (apparently) be a good Shiraz year at the very least, and for many growers a better season than 2010. Garth believes it to be similar to (the good, quite traditional) 06 vintage in many respects.

Stems and filtration: Over the past few years – ever since the 07 XYZ Shiraz actually – the boys have been experimenting with more stems in their Shiraz, with increasingly strong results. As a result the top wines have more whole bunch fermentation and more stems than ever before, which they feel only adds to the structure and helps with tannin. The tannins look bloody good in the 09’s I tried, so this looks to be a very smart move indeed.

On a different tact, they’ve been playing around with different filtration styles and levels too in a bid to try and eliminate some of the Brett problems that have floated around both their own and plenty of other Hunter wines. The boys believe that their wines now are cleaner and will live longer than ever before. Whether that might rob the wines of some complexity though is the main side effect of increased filtration, though time will tell whether the more recent wines look actually look lesser. The jury is out…

Holding back releases: The top Meerea Park releases – Alexander Munro Semillon and Shiraz – are typically released with a few years of bottle age under their belt as it is, with the Shiraz also released as a ten year old cellar aged style. The good news is that this practice will be expanded to include the Semillon too, so expect to see some 10 year Alexander Munro Semillon popping up in years to come (and in quite fair quantities). Will be right in the groove at ten methinks, especially under screwcap.

Meerea Park Alexander Munro Shiraz 2005 ($70): I tasted 4 vintages of Alexander Munro Shiraz and I think this was my favourite, though consistency is admirable to say the least, which makes seperating them on a quality basis rather futile. The story here is all about power, black fruited power. It’s power without obvious sweetness though, in the earthen Hunter fashion, with lingering, sneaky, proper fruit tannins that will have you coming back for more and more. Glorious tannins those. I’ve got no doubt this will be still chugging along in 2025 and still drinking well. Absolute top shelf booze.

De Iuliius
On demand for Shiraz: Mike let slip that his 2009 Show Reserve Shiraz is now essentially sold out, which is well before the next vintage has even bottled, an event that is something of a rare occurrence in the wine industry at present. Said (particularly clever) Shiraz has been snapped up by Qantas for domestic business class, a deal which always makes small winemakers smile. Mike was smiling…

On that topic though, I’d argue that this sort of demand is driven by the fact that the Hunter has hit a purple patch – it’s taken at least a decade, and a whole breed of new producers, but it’s hard to argue with the quality (and marketability) of the latest Hunter wines (and their makers). Mike just typifies this new breed.

Bigger barrels are better: It seems to be a prevailing theme throughout the Hunter these days (and in a few other regions for that matter) and in many ways it has (arguably) been driven by Tyrrell’s. That theme is the move away from 220 litre ‘small oak’ barriques and into larger format oak, notably hogsheads (300 litre barrels) and puncheons (500 litres) with Tyrrell’s using massive (2250 litre) ‘large oak’ barrels.

The theory behind the move is the perception that medium bodied, ‘classic’ Hunter wines are better served by oak maturation in very large barrels. Not everyone agrees of course, but Mike believes that the increased use of larger hogsheads (and larger) has led to better oak integration in his final wines. Judging by the quality of the more recent wines it’s hard to disagree.

De Iuliis ‘Steven Shiraz 2009 ($40): Another winery, another lovely purple 09 Hunter Shiraz. The vineyard source for this one is the ‘Steven’ vineyard – which was once the old Lindemans ‘Steven’ vineyard – planted in 1968 on classic Hunter red loam. It’s a famous vineyard, producing absolute first class Shiraz grapes. The resultant wine is first class to, set in a medium bodied, earthen, vibrant style with grainy tannins and length to burn. This sits at just 13% abv yet still looks beautifully ripe and full. Classy booze at a plain low price. Get some.

No need to apologise for enjoying something especially where a region is doing wonders at promoting itself through a range of events.

I'm always conscious of any perceived geographical bias, especially given the emphasis that the Hunter places on Sydney wine drinkers (and hence Sydney trade/media) and the fact that I write for a Hunter Valley Wine Industry Association backed magazine (Breathe Hunter Valley).

But you're right, the Hunter is doing great things promotion-wise at the moment, and the wines really are looking better than they have in many years, so I can't really be blamed for talking them up.

As for the cause of said success, I'd attribute much of that to said new-gen winemakers/marketers/vicitulturalists etc but also to the strength and the closeness of the wine community up there. Their wine industry association is strong and they are a progressive bunch too, all of which adds up to a climate of positivity and, ultimately, success.

Great to catch up – albeit briefly – last night. I can only really comment on the Hunter based on what I see from afar, plus consuming the good words coming from yourself, Patrick and GW over on TWF.

Agree in that I think there's an interesting mix of old and new happening in the Hunter. Traditional, established wineries like Mt Pleasant, Tyrell's etc are still churning out classics but its the work of people like Thommo that's really tickling my tastebuds.

I've limited experience with the Hunter – where I am in my wine journey means I tend to be a little like an excited puppy when it comes to tasting/ buying/ drinking – my paws are everywhere and my whole body is wagging because I want to try everything. Writing like this – not just an individual TN – adds that extra dimension to a regional perspective, and has me yearning to get down to the Hunter and sample the likes of Meerea Park, Scarborough etc

So all up that's my roundabout way of saying no regional bias perceived here; the Hunter, to me, is doing a great job of telling its story in a broader sense; and those writers I've mentioned above – yourself included – I trust enough to tell that story how it is, based on a call on the quality of what's in a bottle.