(A version of this article first appeared in the December issue of LattéLife magazine. Again it was written for a slightly different audience than this blog normally caters for but I think it works regardless. I’m interested in what you think, for it probably lacks the criticality I usually write with. Or maybe that’s just me being over critical!).

But, in reality, so few of us will ever get to enjoy such unobtainable luxury tipples that they’re basically irrelevant (except for a very select few). 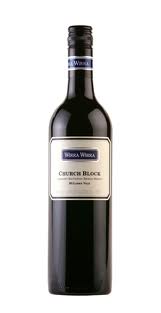 Instead, what is perhaps more exciting is when we stumble across a wine that is both tasty AND affordable. Something that – if you shop around – can be picked up for well under $20, yet is genuinely well made and good quality whilst also being produced by one of the ‘good guys’ of the wine industry to boot.I’m talking particularly about the humble Wirra Wirra Church Block (current vintage is 2009), a red wine that most Australian wine drinkers would easily recognise – particularly given how popular and widely distributed it is – and probably walk straight past.

What makes it worth the double-take however is what it isn’t. It’s not pretentious. It’s not produced from newly fashionable, unpronounceable indigenous Italian grape varieties. It’s not made in the hottest cool climate region of the moment, nor is it natural or preservative free. It is, in the scheme of things, a slightly unfashionable blend of Cabernet, Shiraz and Merlot, made in an oak rich, full bodied form that has changed very little since 1972.

It’s that unwavering, ‘if it ain’t broke don’t fix it’ commitment to the style though that ultimately makes the Church Block such a satisfying drink, a commitment to producing a wine that will always be – and I’m quoting the winery directly here – a ‘smooth, soft red wine that balances the complexity sought by aficionados, with the approachability desired by those seeking pure drinking pleasure.’

Better still, the appeal of the Church Block red doesn’t just lie in its immediate drinking pleasure either, with a recent tasting of the 04 vintage suggesting that this humble wine should get even better with bottle age too, a characteristic not often found in your typical sub $20 red wine.

Ultimately what really drives the Church Block though is that it is a quintessentially Australian wine. A wine that carries its Mclaren Vale identity with distinction, acting as an accessible mascot for both the region and the style, helping to communicate quite clearly what it is that the Vale does so well – namely rich, soft, delicious and full flavoured red wines that simply over deliver for intensity and depth of flavour whilst also showing almost unbeatable value. Hello Andrew,
Good write up, it resonates perfectly with me as the 1990 vintage of this wine was the first wine epiphany i ever encountered.I had started my chefs apprenticeship and after service shared bottle of this over a meal with the boss.Wow, at the time i was amazed that a red wine could have such richness and depth. It sent me into the world of wine, a 13 year ( and counting)industry career, wet feet, numerous Hangovers, and have met many great people in the search for more fine wine! The WWCB is like a favorite pair of uggboots – daggy,comfy,sometime unfashionable, but always rewarding and comforting to put on.

Good piece AG, spot on in that it may be unfashionable, but it's like the old worn t-shirt you can't bear to throw out as it's so comfortable.

A well written piece Andrew. You get to the point and tell it how it is. No need to be critical, etc.
Like it.

Hey Andrew, nicely written piece etc. etc., but if I could play devil's advocate for a moment… how many of your readers (blog readers, that is) are in the market for Church Block? Speaking for myself only… I read your blog to hear about less commercial wines. No dramas if it's only once in a while though.

Sorry, but this comes across as rather patronising.

Lots of soppy into' and a miserly short single paragraph about the actual wine. And no score! I guess, despite all you say, you don't really believe it to be really worthy of one.

Not a problem Anon, always open to criticism. You are right that this is definitely different to my usual posts, and that is purely because it was written for a magazine first and foremost (one where I don't usually publish scores in). Horses for courses, and different style posts for different audiences (if you get my drift).

Oops. Forgot about the magazine bit. Many apologies!!!! Keep up the good work……….

Joshgtv – Most of the time I think you are right about readers of this blog generally not being in the Market for Church Block, but I can tell you that if you get stuck in a pub bistro with an indifferent wine list(and there are many of those) then the Church Block is the sort of wine they are likely to have.

Picked up a couple of bottles of the 2010 on the way from the pub to the pizza place tonight. Worked a treat – what's not to love about it. Great writeup.