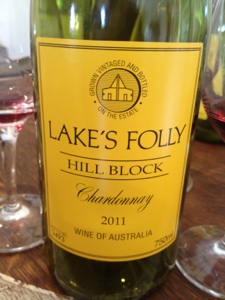 Whilst it was anything but formal, I managed to squeeze in a quick Hunter Valley cellar door whip-around over the weekend, mainly because I was in the area, but also because I’m yet to work out how to go on holidays and avoid wine…

The following, very brief, impressions on a few wines I’m writing down largely so I don’t forget. Notes are forbidden on holidays you see…

When in Rome, go to the vineyard that doesn’t send samples…

I do like Lakes Folly, I like the focus of this tiny boutique operation (just a fee thousand cases) and I like the old school ‘if it ain’t broke don’t fix it’ consummate savoury charm of the wines, even if I can no longer afford to buy them (Lakes Folly Chardonnay now $65? Woah). This year sees a brace of new releases under the Lakes Folly label too, including a brand new ‘Fogarty’s Folly’ trial wine that I was sworn to secrecy about (although it appears in the new releases on the Lakes Folly website. Not really much of a secret then).

The 2011 Lake’s Folly Chardonnay must rate as one of the best yet, carrying the line and persistance of a classic Folly Chardonnay. That balance between weight and acidity is what makes this the best full bodied Chardonnay in the Hunter bar none. It really is ‘that good’ in 2011. There is, however, another Lakes Folly…

This year, you see, there is a new Folly Chardonnay in the 2011 Lake’s Folly ‘Hill Block’ Chardonnay. Drawn from – unsurprisingly – the famous Hill Block, this carries an extra layer of intensity and power over the standard wine, complete with more new oak, more barrel ferment and malolactic fermentation. It’s thus richer, more powerful and more winemaker influenced, yet given that the LF Chardonnay is typically not all that ‘made’, it carries a particularly freshness to match that complexity. Top class wine, that will live for an age (and now bottled in a screwcap too). Superstar Hunter Chardonnay (if priced accordingly).

Paired with the Chardonnay is the current release of the Cabernets, now 2010 and looking classic. Actually, it’s 95% a classic wine, the lovely pencil shavings varietal intensity and mid palate looking delectable. The only gripe with this wine is the hint of confection and lack of flow through the finish, reflecting the stop-start 2010 vintage. Still classy stuff regardless.

A caveat here – I was staying as a guest in the Scarborough cottage so I may well be biased.

Regardless, the new 2010 Scarborough White Label Chardonnay was certainly looking sprightly. It carries a formula that works nicely for good Hunter Chardonnay – clever French oak handling, a little lees work and no malo, making for a wine that has richness yet plenty of acidity. The rest of the Scarborough range is generally affable and consistent, if occasionally a little staid, but this White Label Chardonnay looked genuinely classy and interesting.

I didn’t have long to taste through the Tyrrell’s range this time around, however I did manage a quick look at the new 2011 super premium red trio of the 2011 Tyrrell’s 4 Acres Shiraz, 2011 Tyrrell’s Johhno’s Shiraz and 2011 Vat 9 Shiraz, all of them looking bright, exceedingly fresh and genuinely classic. 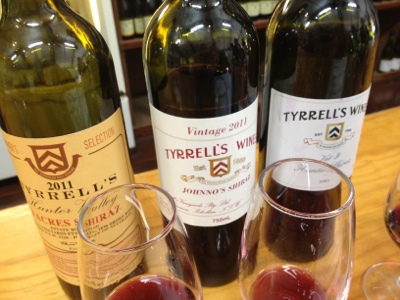 As usual (or for me at least) the question remains about which of the three I prefer. This year the 4 Acres looks particularly light and perhaps a fraction confected and warmish. It is easily my least favourite out of 2011 (someone has to lose). Stepping up a notch and the 2011 Johhno’s has that classic sandy red fruit profile and soft tannins that make it an immediately appealing wine. I actually think it has the edge over the 4 Acres this year, with more freshness and vibrancy. Does it have the depth and potential for complexity though?

Easily my pick of the three though has to the 2011 Vat 9. It carries that blend of power and juicy red/purple fruit vibrancy coupled with genuine mid palate power that you really want in a young Hunter red, the package completed with an extra tannic edge over the other two. I’m not quite convinced it will be a better wine than the 2009 but certainly in that similar vein of richness and weight. I’d buy some. Top Tyrrell’s red.