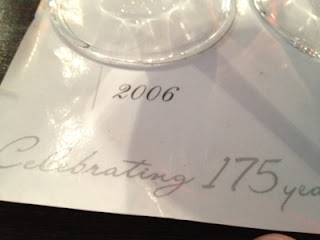 Whilst the whole Hamilton operation itself is based out of McLaren Vale, it is the Leconfield arm that is most famous, its reputation built on the 36 odd years of celebrated Coonawarra Cabernet now in bottle (and some handy Merlots).

I recently had a look at 10 of the most recent vintages of Leconfield Cabernet with winemaker Tim Bailey and came away impressed by just how much the wines have evolved in recent years. Actually, they’ve more than just ‘evolved’, the wine styles are barely recognisable from those famously weedy wines of the 90s.

It’s not all beer and skittles though as I do wonder about whether the most recent releases are too modern. A minor quibble no doubt for they’re certainly much more drinkable.

The following notes then are largely as written on the day. I’ve included some other stuff, choice quotes and comments from Tim too.

Leconfield Cabernet Sauvignon 2001 (Coonawarra, SA)
Tim acknowledged that Leconfield turned a corner in the early noughties, starting in the vineyard itself: ‘The cropping levels in the 90s were…. a little above’. This wine still looked rather different to the rest of the wines in the vertical.
Noticeably stalky, herbal and dry, all ferns and red sand characters. Considerably more evolved than many after it with a sweetened beef stock edge. Beef stock palate too is rich and warming, perhaps a little warm and spiky but solidly varietal, rich and hearty, that beef stock richness offsetting the hearbecousness rather nicely. Liked it.17.5/20 91/100

Leconfield Cabernet Sauvignon 2002 (Coonawarra, SA)
A frost year with severely reduced yields. Interestingly, the winery had no destemmer until this vintage so everything was basically fed in as whole bunches! No wonder they were green…
Lots more black pepper here. A dark edged and unsweetened style. Very dry, unsweet tannins. Flirts with under ripeness and harder tannins but has some carry. Good but not great. 16.2/20 87/100

Leconfield Cabernet Sauvignon 2003 (Coonawarra, SA)
A warm year with quite big crops. Apparently it was about this year that the additions were reduced too, particularly backing off the tannin additions from about this vintage.
Sweet, caramel oak edge to the nose. A much riper wine in context. A bit one dimensional? Slightly hot and heavy element to the palate. Rather more bulky and warm style through the middle with dry and hotter finish. Shows the vintage though certainly a more rounded drink than the 2002. 16.7/20 89/100

Leconfield Cabernet Sauvignon 2004 (Coonwarra, SA)
A classic year and Tim gives all the credit to the vineyard ‘the shallow soils of the vineyard give fine tannins and structure. This was my favourite wine of the lineup.
Perfumed and posited. Again the tiptoe between leafiness and riper beef stock. Long and well defined dark berry/cassis palate shows a deep and hearty sort of character though with quite high acid. Real long termer this one with a depth that is quite impressive. Top shelf. 18.5/20 94/100+

Leconfield Cabernet Sauvignon 2005 (Coonawarra, SA)
Again an atypical wine and one that I think looks a little too open and simple. More oak too. Interestingly, Leconfield Cabernet is matured in 15% American oak which Tim thinks ‘adds richness 3-4 years down the track’. I think I’m perhaps being harsh as it is very inviting. Just not as delineated as the wines around it.
A change. No leafiness here, just even ripeness. Plusher, more round, less definitive. Tannins are lighter too, prettier even. Less classic but much more even. Too even perhaps but certainly solid. The more times I came back to it the more impressive this looked. 17.7/20 92/100

Leconfield Cabernet Sauvignon 2006 (Coonawarra, SA)
Another classic wine from a classic vintage. I’ll take the 04 and 06 thanks. The oak handling looks better here too. The more recent releases have 30% new oak and they’re now ‘looking for barrels with a longer, lighter toast’ for better integration.
Lovely nose on this one. Retains that leafiness of the best vintages but with an extra slickness of coal and rich fruit. Softer fruit on the palate but excellent light tannins. Looks a slight hole through the middle but certainly cast long. Hasn’t quite got the definition of the classic 04 but a much more even wine and hence deserves a similar score. 18.5/20 94/100+ 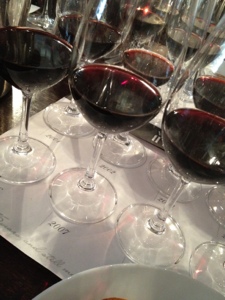 Whilst Coonawarra weathered the 2008 vintage heatwave better than some South Australian wine regions, It’s still not my favourite year, particularly for even tannins and vibrancy.
A big eucalypty wine. A solid whack of eucalypt and mint. Dry and boozy, minty palate. Picked early methinks and not quite as long or properly ripe. 16/20 87/100

Leconfield Cabernet Sauvignon 2009 (Coonawarra, SA)
Back in the zone. It’s all arms and legs at present, though certainly some promise.
Classical nose. Welcome leafiness in this instance. Blackberry fruit on the nose but retains the leaf. Dry tannins and big extractive style, looks a bit dessicated on the finish. Alcohol dryness. Wish the palate could match up with that nose though certainly some form. 17.7/20 92/100+

Leconfield Cabernet Sauvignon 2010 (Coonawarra, SA)
Very young but also particularly modern looking. The winemaking has changed quite a bit in these recent vintages too. ‘The late 90s wines spent a massive 6-8 weeks on skins (which was just too much)’. ‘Now they’re pressed off between 2-4 baume with the aim of creating a wine of perfumed fruit but with plushness and length of flavour’
A rich and even sort of wine this one. Not released for another 2 months. Plush. Really plush, has a lovely pure blackberry fruit to it. Long and dry with soft fine tannins. Lovely rich flavours but is it a little too soft? Looks top flight, though definitely I’m interested to see how it looked as it settles down. 18/20 93/100+