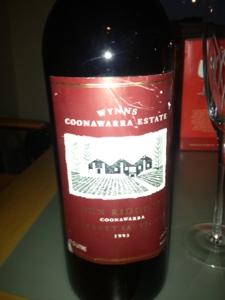 I have fond memories of this John Riddoch Cabernet. Actually, it was more the Wynns Black Label of the same vintage that I have the fondest memories of, the Riddoch only playing a bit part, although an important one.

That 1993 Wynns Black Label, you see, was one of the wines that lured me into the industry at the tender age of just 19. I was in my second year of university and – like many 19 year olds – slightly disillusioned with my undergraduate degree.

I was a long haired hooligan with too much time on my hands and a love of drinking, at the time working in a small – but passionate – fine wine store in suburban Sydney. I was young, impressionable and, quite simply, at a perfect stage to become infatuated with wine…

The reason why the 1993 Wynns influenced me so much was largely as it was available and affordable. I could buy it for a similar price as the current vintage (which was the 1997) and it showed all of the interesting secondary flavours that I thought wine should show.

It was not profound wine really but it was interesting, and certainly interesting enough to have me thinking more about what happens to wine in general as it ages.

At the time – as an avid Jeremy Oliver’s Wine Annual/James Halliday’s Wine Companion fan – I knew that the 93 was from an inferior vintage (in the Wynns context at least) which obviously was part of the reason the wine was still around.

Again, though, it showed enough Coonawarra Cabernet character to have me hooked, even if it was light and green compared to the vintages around it.

When I finally had the chance to try this older brother John Riddoch I remember being even more impressed again by the level of intensity and depth, an intensity that would see me dreaming about Wynns John Riddoch for many years after that.

Fast forward almost 13 years and I must confess to loving John Riddoch less now than I did then, my love affair flattened several years ago by a carefully tended stash of the ridiculously heavily oaked 1998 wines that only looked more like a caricature every time they came out (and killed my buzz in the process).

Just like it did then, this 1993 (from magnum) still looks leafy and light too, although now the fruit is starting to fade whilst the oak and added tannins do not.

On the palate looks drier and surviving via some mid palate generosity and raspy unripe fruit tannins, added tannins and oak tannins.

The signs that this had serious intensity in its day are there, but you can’t help but crave more flesh on them bones.

Regardless of the state of the wine itself, it was still a pleasure to see this red around again. Good times, great wines, thanks for the memories.

Is it wrong that the phrase which jumped out at me here is "long haired"? 🙂

Wouldn’t be a bad idea to clearly show your name on your home page either under your writings or with your About Me.

Cheers Ashley, I’ll see what I can do