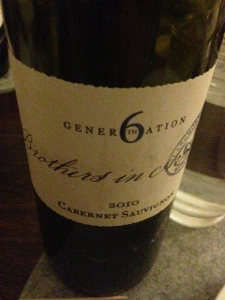 I’m in university exam mode at the moment (which is why I’ve been noticeably quiet this week), so tasting wine has been put on the backburner and reading about making it has taken centre stage (want to talk talk about IPM schedules and the solubility of Potassium Bitartrate in juice? Ugh).

Regardless, this wine is worth discussing. It came in a box of mixed Brothers in Arms wines including an older 2007 Brothers in Arms Shiraz, a 2008 ‘No.8’ Shiraz and a mix of other blends and Cabernets and such. I opened them all together and openly struggled with many of them, the two Shiraz in particular. They were hard, boozy, dried out, old school Langhorne reds that I can’t imagine actually drinking, let along loving. I no like.

Anyways, I picked up that a few other scribes thought the same way. Jeremy Pringle, Winsor Dobbin and Patrick Haddock all expressed a similar impression on twitter. There was consensus. We no like.

What I didn’t expect was Brothers in Arm’s GM James Hall to email me and ask to chat about it. He’d heard second-hand at a Hong Kong trade fair (word travels fast) that a bunch of us pesky wine scribes were bitching about his wines and wanted to sort it out.

In situations like that I’m always happy to talk expand on sentiments. Seven times out of ten the producer even tends to half agree ‘yeah, I can see why you wouldn’t like it’ or ‘it was a difficult year’ or ‘I’m not happy with it either… don’t print that’ etc etc. The other three more times the winemaker just wants to give you a spray and call you a dickhead. That happens too.

What I most like is when you get a straight answer, and James gave that in a suitably pragmatic style. He explained that the wines were a product of the vintage, that they looked riper than he would truly like to see them, yet was still happy to call them Brothers in Arms wines. Further, they (the Brothers in Arms crew) made some significant changes in the vineyard post 2008, changes which should see more freshness in the wines and more even ripeness levels.

As for this Cabernet – well it was the one red in the lineup that I liked. It was the most balanced, the most vibrant and the least overripe of the range, carrying that trademark richness and penetration without the heat and desiccation. It was, as James agreed, a step in the right direction, just needing more detail to be top class.

A great result in the end. Yes. Was the only good wine in the box of six they sent.
GW