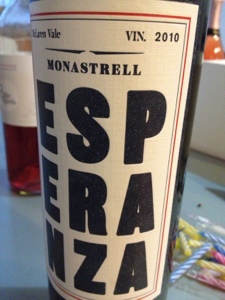 Esperanza means ‘hope’ in Spanish. It’s also a Spanish D.O focused on Verdejo, though that doesn’t really matter here (can confuse if you type in the wrong URL though). In this context, the name is all part of the message, the ‘hope’ reflecting a sentiment that many McLaren Vale winemakers hold – that Iberian grapes could well be the way of the future.

The Spanish message is carried beyond just the name too, the grape given the (Spanish) ‘Monastrell’ tag instead of Mataro (Australian) or Mourvedre (French). Heck, it even comes with a little plastic, Torres-esque bull thingie on the neck too.

Digging a little further and it appears this has been made by the Wirra Wirra crew, although you’d only know that by the R.G Trott reference and the winery address. The winemakers are cheekily listed as ‘Dos Pablos’ which is apparently a Spanish reference to Wirra Wirra. Cheeky, and a nice tie in too. Fertile minds behind this drink.

As for the juice itself, well, if clever, savoury wines like this are what we are going to look forward to in the new ‘Iberian Vale’ too then bring it on.

Perhaps the only thing that may hold it back is the inherent reductive and shy nature of Vale Monastrell/Mourvedre/Mataro etc, that withering, brooding personality that makes it so impressively savoury and deep but also anything but seductive. Here that persona is supported by enough concentrated, dense licoricey, black/red fruit to carry everything off, but it’ss still hardly a generous wine by any measure.