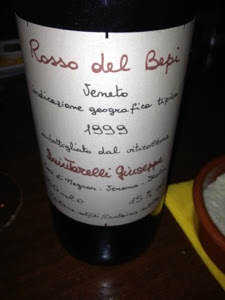 I tried this wine just weeks after that fateful first encounter with a Quintarelli. As a result, when this lobbed on the table I was excited. Not quite misty eyes excited but at least a little jittery with anticipation. Excited, but also half expecting a disappointment – could it really match the Amarone or was this another one-off cult hero?

No disappointment here though. Just glory. Complex, intense, layered glory. That’s of little surprise when I discovered that this is essentially a declassified Amarone, a wine produced in those years when (the late) Giuseppe Quintarelli decreed that the wine didn’t quite make the Amarone grade. The IGT labelling is a nod to the declassification even though it could qualify as an Amarone under normal labelling laws.

The blend here mirrors the ‘standard’ Quintarelli Amarone too, being a blend of primarily Corvina and Rondinella, with smaller portions of Cabernet, Nebbiolo, Croatina, Molinara and Negrara.

This is no ‘standard’ wine though, spending 7 years in oak, an ageing period which is unheard of even amongst most ‘normal’ Amarones. It is, for all intensive purposes, 99% a Quintarelli Amarone, just at less than half the price. And my lord is it a cracking wine.