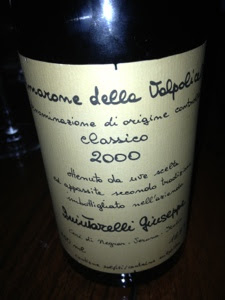 Another wine that had a starring role at the NSW Wine Awards Judges Dinner, and again it was a first for me. My first Quintarelli that is, an estate that has a ‘cult following’ (particularly in the US), with this Amarone lauded as the one of the bestest Amarones ever in the history of the world. Or at least that is what you’d expect given the hype.

Since this bottle entered my life though I’ve become a Quintarelli convert, hunting down bottles all over the world to taste and buy, feeling like the wine equivalent of an obsessed One Direction fan buying memorabilia (except with Italian vino).

This wine was, quite simply, the most profound Amarone and indeed one of the finest Italian reds I’ve ever tasted. An Amarone that is as far from the volatile, dried out and hard standard Amarone style as can be imagined.

Part of the intrigue surely must be from the winemaking itself – the Quintarelli wines spend up to 8 years in large wood, the Amarone only released in certain vintages and only when deemed ready. The late Giuseppe Quintarelli (whom passed earlier this year) was also a famous perfectionist, his winemaking style an exact and uncompromising one.

The grape mix is unique too – largely Corvina and Rondinella with less Molinara, complemented by Cabernet Sauvignon, Sangiovese and Nebbiolo. Such a mix is anything but traditional, even though the big oak and methods are entirely old school.

This contrast – and the aforementioned attention to detail – ultimately adds up to one seriously engaging wine.

It’s an evolved and meaty wine at that, the nose heavy with dense caramelised red fruit and that unmissable Amarone concentration. It’s a warm nose, but not excessively volatile, the long barrel maturation apparently failing to flatten the nose. That vibrancy connects through to the palate too, the fudge-cake rich and seamless in that ‘oak aged forever’ style. The oak here gives textural weight, yet it doesn’t taste oaky, another paradox to tick off.

Ultimately what makes this so satisfying is the length – it’s incredibly long and fresh and long and vibrant. Just the longest, most defined and powerful red with a palate silkiness yet with proper tannins too. I didn’t even notice the alcohol on the palate either. What a brilliant, complex and involving wine. Another smart Soave from Anselmi – this time the Anselmi Capitel Foscarino 2021
December 2, 2022