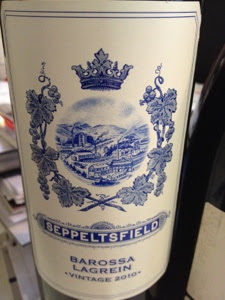 Lagrein remains an interesting choice for the Barossa, the variety better known as the grape of choice in cool Alto Aldige where it makes quite pretty, light bodied red wines to complement the regions crisp, textural whites. An inspired choice for the Eden Valley? Not quite yet, though this is certainly pretty enough. That label is fantastic too (which I have said numerous times now. Shut up Andrew).

The methods here are traditional, which means handpicked fruit, open fermenters and 14 months in seasoned French oak. 10% Cabernet Sauvignon is also included in the blend. Picked up the trophy for ‘Best Dry Red – Other Varieties’ at this years Barossa Wine Show too.

Berries. Lots of fleshy, pretty ‘fruits of the forest’ berries – that is what this red is all about. Dig underneath the berries and it is all blackberry and raspberry cordial, the fruit all front palate and carrying a little young vine skinniness through the middle before finishing with fine, light tannins.

It’s definitely more Barossa than Lagrekn, a wine of flesh and affability but not quite the ethereal juiciness it can show I’d like to see more definition and more length but it certainly has some seduction about it.