Ducks in a Row Pandora’s Amphora 2011

Amidst the recent controversy about what exactly is going to happen with the amphora used to make this wine it seems the right time to be publishing this tasting note, if just to remind how much is at stake. 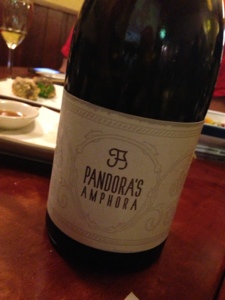 Produced from Vermentino, Fiano and Moscato Giallo handpicked from the Chalmers Heathcote vineyard, this clever white was notably fermented in a single large clay amphora that Ducks in a Row winemaker Glenn James borrowed from Penfolds Nurioopta winery.

Besides the controversy about that amphora itself, what makes the wine so unique (in Australian terms at least) however is as much about the process as anything else, the wine naturally fermented and then ‘left on skins’ – the skins and seeds not separated from the juice – in the amphora unsulphured for seven months. This white also underwent a malolactic fermentation and, at the end of the 7 months, was pressed out using an old basket press that Glenn also borrowed, the wine then spending a further 6 months in an old puncheon before it was bottled unfined, unfiltered and with minimal sulphur additions.

Whilst some may contend that this is not a ‘natural wine’ (not that we want to start getting into that long-winded discussion. Ugh) what’s not in contention is the validity of these revivalist winemaking methods, many of which mirror the way wine would have been made a millennium or two ago in eastern Europe.

Naturally such methods are not without their dangers and question marks, particularly the ‘plain silly’ (one of my winemaking lecturers words. He was joking, but you get the drift of how it is viewed by tehcnical winemakers) idea of leaving a white wine on skins – a technique that, amongst other things, leads the wine to pick up grape tannins and colour, two characteristics considered completely undesirable for white wines. Indeed very few red wines spend this long on skins either, largely for fear of the tannins that such a long maceration (to use the correct nomenclature) can deliver.

The benefits, however, of such a ‘hands-off technique’ are wines that can potentially show prodigious levels of texture, fragrance and complexity, the extended skin contact turning simple clean grapey juice into white wines that can compete with reds for impact, depth and intrigue. Indeed the finest wines of this type produced in northern Italy, Slovenia and the Loire are some of the most interesting – and occasionally confronting – white wines out there, particularly those from the likes of Occhipinti, Gravner et al which I really really like (especially Occhipinti).

In the case of this wine the old world techniques have really worked too, producing a wine that is not only interesting and challenging but a great drink too. Or at least I think so (not all my drinking companions were as enamoured as I was).

Just from appearances alone this is different, with the lack of clarification resulting in a light haze and slightly darker colours than is typical for 1 year old Australian white wine (though quite light considering some of the ‘are-you-sure-this-isn’t-Fanta’ orange wines out there). Beyond the haze the nose on this positively sings with vital aromatics – all fruit loops, sherbet, pink lifesavers, apricots and orange juice. It is a wonderful, almost overwhelming nose of real delight.

Happily the palate delivers too (though the nose is the best part) with vitality and texture,the round layers punctuated by shapely grape tannins. Those tannins are quite integrated considering the long skin contact actually – plenty of Italian whites done with similar maceration come out looking really quite astringent. The wine finishes with some hard, slightly shrill, 2011 vintage acidity but this remains perhaps the only downer.

Ultimately a delicious wine with an intriguing story, I can’t help but give this Pandora’s Amphora a massive thumbs-up. Will we see a 2013 iteration? Really interesting and thought provoking wine this. A wine you can chew over in many ways.