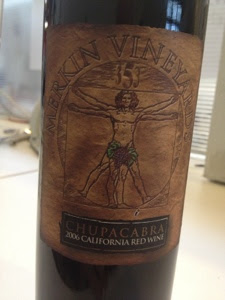 Putting aside the merkin reference for one moment (who names a wine after a pubic wig anyways), there is intrigue here.

It’s not produced by a winemaker for starters. Actually, it’s made by Tool frontman Maynard James Keenan (with help from Eric Glomski) who, when not touring and such, rather likes wine. He rather likes Australian wine too and is known to hang out with Penfolds chief wine whisperer Peter Gago when either has some free time here or in the US.

Maynard’s wine operation is based near his home in Jerome, Arizona – a dry, dusty, semi-arid spot better known for its copper mining than wine. With his Merkin Vineyards/Caduceus Cellars operation Maynard is attempting to not only craft individual wines but also to push the boundaries a little in the process.

With the Chupacabra label (a reference to a mythical American creature known as ‘the goat sucker’ that roams Central/North America) Maynard casts his net further afield, picking up grape parcels when and where he can. A vinous opportunist’s label is Chupacabra, the ‘recipe’ changing every year.

This 2006 Chupacabra red has been sourced from California, with Cabernet and Syrah (plus an undisclosed assortment of other varieties) making up the blend. Stylistically, the intention is to craft something ‘modelled on the red wines of Australia’, which means body and weight and richness.

It fits that mode too, a ferrous and quite forward red with developed, peppery and spice and pan juices black fruited Shiraz along with a bretty, meaty overtone. The brett edges the palate too, a metallic hardness to what is otherwise a rich, and generous earthen red.

Ultimately this looks more Rhonish than Australian, the pepper and spice and wildness more Grenache Shiraz blend than Cab Shiraz. That outré character both makes and breaks the wine, promising complexity and character yet ultimately delivering a slightly hobbled and overly advanced wine that looks brettier and unbalanced every minute it it is open.