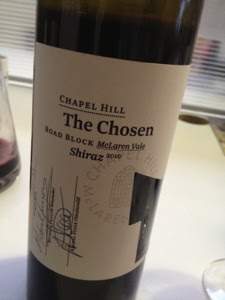 These two single vineyard Shiraz first broke cover in last years Scarce Earth release. At the time – served blind – I gave them both quite divergent scores. Hinting that I might have got at least one wine a little wrong (The Road Block), the kind folk at Chapel Hill sent both for another review. That’s service…

I tasted these two single blind again and unsurprisingly the scores came closer together, though the House Block wins again.

I’m going to include my (double blind) tasting notes here from last year too, just for an interesting reference point.

(April 2012) Sweet purple licorice straightforward richness. In the context of the style its ok but there is some caramelised hardness and weird sweetened fruit on the palate. 16.5/20 88/100+

(Jan 2013) Has a playdoh esque edge to the oak on the nose. Really deep boysenberry with gravelly tannins, can’t escape that licoricey overripeness. Still like the outré wildness though. Good at least 17.7/20 92/100 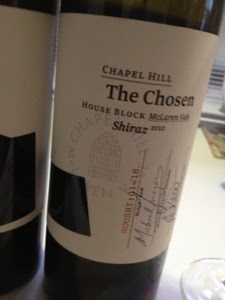 0.8 hectare, north facing House Block planted in 1977 on own roots and is farmed biodynamically. This spent 20 months in 16% new oak hogsheads.

(April 2012) Super concentrated but also quite composed. Looks tight and dark and rich. Like the tannins and a sense of lightness. Great tannins and long tannins. Prefer the tannins markedly on this one. Nice wine. 18.7/95

(Jan 2013) Has more composure and a lovely sense of sweetness to match the fine gritty tannins. So plush and rounded on the edges. This has the most beautiful plush fruit and tannic excellence. Yes 18.7/95