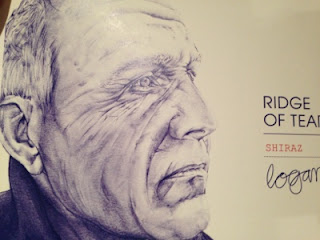 Welcome to the world of the vigneron. A world where, at any moment until the wine is in bottle, it all can go wrong. Even then, when finally in bottle, your vinous pride and joy may not be showing as well as it could, and indeed there is no guarantee that anyone will actually like it (or want to buy some). Such is the wine producers lot…

Happily, with these new Ridge of Tears wines Peter Logan has emerged victorious. Or so the press release says. One whiff of each wine suggests he might actually have may have nailed it too…

Thinking about the concept, I believe I  first heard it back in 2010. At the time, Pete Logan told me about his idea of making a whole range of Mudgee/Orange comparison wines, kicking off with Shiraz but also with the potential for Chardonnay too.

Conceptually it seemed nothing if not a good idea. Mudgee and Orange, although just 70km apart, often seem like entirely different worlds, with Orange seemingly focused on Sauv and Chardonnay, Mudgee on Chardonnay and Shiraz/Cabernet. One is cool, one is warmer. One makes aromatic wines, the other dense ones. Light and shade.

In reality, whilst Orange and Mudgee may have very different terroirs, they actually share a lot too. Winemakers for one, with many Mudgee producers digging in the Orange basket for a requisite Sauv or Pinot Noir, whilst Orange producers merely turn their noses up at the mere thought of Mudgee fruit…

Another thing they do have in common, like much of Australia really, is a focus on Shiraz. In Mudgee it may be blended with Cabernet and in Orange with Viognier, Yet a Shiraz interest is something that everyone can agree on.

What none of them seem to be doing though is making comparison wines like this. Comparison wines emphasising terroir and not winemaking, in a fashion that seems to have come from a Rhoney direction.

The wines too look more like Syrah than Shiraz, the style lighter, more aromatic and more spicy, the alcohols just 13% and the colours light and bright. Two wines that are, in their particular way, celebrate different personalities in a much more nuanced fashion than I was expecting.

Kudos Pete Logan, these are cracking wines in superb packaging.

Sourced from a vineyard sitting at 870m (which is very high for Shiraz), both this and the Mudgee wine had similar handling in the winery, the fruit basket pressed and hand plunged.

Of the two wines I absolutely like this more. It has a spice and fragrance to it that marks this as a wine of prettiness whilst the Mudgee wine is one of brawn. This could well be a Syrah to the other wines Shiraz. Still, it is a close-run thing.

Bright ruby-red in the glass, the nose here is built upon black pepper and redcurrant fruit, set lightly but not without concentration behind it. The oak is well integrated – that is, it’s not obvious in any way – and spice dominates everything. That spice runs through the palate too, a line of dark leafiness to the slightly less serious fruit flavours. Light and shade once again. Tannins are firm, proper firm and slightly bitter (yet not unripe) and the acid noticeably high.

A very good modern Australian red in terms of style, yet also just a very good Orange Syrah. For some raised on a diet of sweet inky Shiraz this will seem almost wimpy in its leafy daintiness, yet I can’t help but be attracted by the Pinot-esque delicacy. Should be even better as it puts on more weight in the bottle too.

The packaging is only slightly different, the label description almost identical too. Save for the different expression of the label’s big blue head – and the different altitude – you’d be hard pressed telling these two wines apart visually.

In the glass though this is a rather different wine. It’s darker for one. Redder and less glossy. The alcohols may be identical yet the nose is sweeter too, sweeter fruited and almost more conventional in its dark berry form. It tastes less ready too, more hulking, a wine that seems to have been squeezed into the bottle whilst the Orange wine seemed to have just slipped in. The tannins are broader, the alcohol more prominent, the flavours bigger and easier to get your head around, more berried and sweeter through the middle.

Whilst I prefer the grace of the Orange Shiraz, particularly after going back to it, I admire this wine too. It is proudly earthy and regional and full, the flavours are bigger, easier, riper, much like it should. In certain circumstances I think it would be a better drink than its brother to boot, even if it might not be a better wine.

Lovely red, if not quite as great as the superstar Orange Shiraz. But will they change places in years to come?