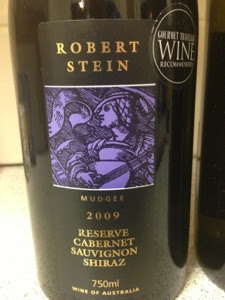 I often think of many Cabernet based Mudgee reds as like vegemite – if you’ve grown up with them, then their structure, weight and flavours can typically be rather satisfying. If not, they can seem like oddities, all red earth dryness with much less of the sweetness and affability of an equivalent Barossan or Coonawarra example (just to mention other Cab Shiraz). What the best full bodied Mudgee Cabernet based reds have however is an effortless depth, a heartiness that is utterly Australian and unforgettably ageworthy.

This is such a beast.

From first whiff it has a wonderful, limitless chocolate earth lift to it that is enjoyable in its absolute regionality. A product of a warm vintage no doubt (2009 was such a year), the black fruit ripe and edged with teriyaki beef meatiness. True, you can’t escape the heavy, heady, red dirt on red dirt Mudgeeness, topped off with a candied lift, but that is also what makes it great. The palate is dark, very long, earthen and hearty, the tannins slightly ferrous but also edged with a warm vintage sweetness that ratchets up the drinkability.

Ultimately it is a crime to drink this right now, purely as it will be an intriguing, evolved and complex beast in 10 years. An esoteric, savoury style perhaps but wonderful because of it.

Perhaps the question should be, do you like Vegemite?