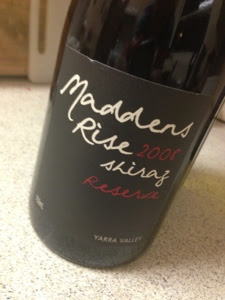 Note the slightly different ‘source’ today. This bottle came courtesy of my Mum, whom liked this wine so much that she wanted to share it with me. Nice work Mum.

There’s an admirable level of detail in this wine and it shows too. The website lists every clone, the winemaking reflecting a pursuit for greatness, right down to the admirable grafting of Merlot over to Nebbiolo (the folly that may be or not. Nebbiolo being the masochists variety). Speaking of making, this is 100% whole bunch fermented in old oak (with a natural malolactic fermentation to boot) before being bottled without filtration.

It looks a little wild actually, the colour browning at the edges. Who cares about colour though when you still have that barrel sample freshness, the sausage meat white pepper Shiraz overtones with a healthy dose of whole bunch spice. You can see the warmth of the vintage in the fruit concentration, yet the acidity and the brightness suggest grapes picked at their optimal levels. A lively, mid weight Shiraz that has evolved into something meaty, full, concentrated red of garrigue interest. I’d drink it sooner rather than later, but that’s not such a bad thing either. Much to like here.