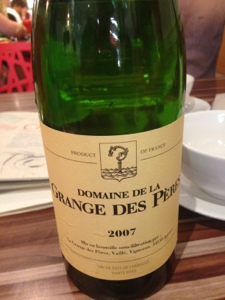 Apparently French restaurateurs fight to get this cult white, such is its heralded reputation.

The appeal is as much about rarity as it is pure quality, with only a handful of bottles of this white typically making their way to Australia each year, the production drawn from just a single hectare of vines.

Couple that scarcity with the unquestioned status of Domaine de la Grange des Pères as one of the premier ‘nouveau French’ (whom operate largely outside the AOC rules) Languedoc producers, and you’ve got an über rare wine.

Actually, the simple label nouveau French is almost being a tad disrespectful, for the viticulture and winemaking here are top class. Think tiny yields (1-1.5 tonne/acre) – from a vineyard known for its tough limestone soils – and extended oak ageing (16-24 months in demi-muids for this wine) to add texture.

A blend of 80% Roussane, 10% Marsanne and 10% Chardonnay from a warm year, what is most interesting about this wine is how it changes in the glass. Initially it presents as a somewhat oxidative
style though still a wine of fruit – melon, melon and more melon (honeydew I think) in a broad and languid form. Served a little coole,r the nutty oxidative edge filled out the palate adding textural weight and bringing the yellow apple fruit back into line.

There is unquestionable intrigue in the enveloping texture of this white, yet it is also a challenging wine to love – it’s really rather fat and lacking enough acidity to keep everything together. Knowing the methods and ideology behind the wine helps give this wine context and some cerebral pleasure, yet ultimately it remains a rather unfulfilling and flabby drink.

A wine to talk about, if not quite actually finish more than a glass or two.