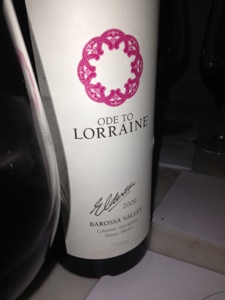 In some ways it’s an old school style, a wine style built upon the notion of using oak to build palate richness, with prominent oak sitting alongside typically very ripe fruit and soft tannins. It’s a style that, in general, favours generosity, softness and roundness over any notion of subtlety or complexity.

The question that must be posed, however, is whether this celebrated signature is a dated one. Whether latherings of new oak, red wines pressed off skins early (to give generosity) and a distinct emphasis on concentration, rather than structure, is really the best expression of Barossan grapes.

I started pondering that question after trying the 2010 Elderton Neil Ashmead Grand Tourer Shiraz at dinner recently (reviewed below), a wine that is a rather different beast in the context of Elderton and a wine that, for mine, was much more enjoyable, more characterful and more intriguing than any of the (often more fancied) releases around it.

Cameron Ashmead, Co-Managing Director of Elderton, gave a very clever answer to my ponderance too. He explained that the Grand Tourer is but the first of a new wave of Elderton releases, and that the winery knows how important it is to have wines like Command Shiraz – which fits the paradigm of Barossan icon Shiraz – to uphold the lineage, whilst the winery pushes forward with interesting winemaker projects (like fun blends and such).

During our discussion Cameron shrewdly explained that, with the rich, oaky top end reds selling faster than ever, it was important to realise exactly where the wineries bread was buttered. He felt tje best ploy was to play with the biodynamic, single plot, project wines – which wine writers like me want to write about – whilst keeping the customers, who love the generous Elderton style, happy with the traditional form.

More to the point, Cameron explained that Elderton have been evolving the house style in recent years too, leaning more towards French oak in the barrel hall and earlier picking in the vineyard.

It’s a leaning, of course, yet the more I think about what is a quite gentle evolutionary approach, the more I like it. Commercially it makes sense. Looking towards the future it makes sense too, as it gives a top-down opportunity for gradual change.

Ultimately I’d like to see more Grand Tourer style, ‘modern’ wines from Elderton (which is reflected in my scores below ), yet I’m also willing to admit that doing so may be throwing the baby out with the bathwater…

The following wine were tried over dinner recently, with Cameron Ashmead on hand to dish out knowledge. Extra notes are in italics. Wines were tasted both with, and without, food.

Elderton Eden Valley Riesling 2012
10.5% alc. TA 7.0, pH 3.22
Broad, soft and limey, fleshy and very forward. An easy Riesling with low acidity and quite ripe fruit. Affable if quite forward, the rear soft but tightened up with judicious phenolics. All heart and quite generous for a Riesling, if just a bit ill-defined. 17/20 90/100

Sweetly liqeuered oil slick slickness. This carries very concentrated boysenberry ripple fleshiness, the fruit soft and softened further by creamy oak that pushes through the finish. Has a little of the tarry, treacle rich baggy fruit of the heatwave vintage. Very rich and smooth, if porty. Again much generosity, if just a little broad. 17.5/20 91/100

Elderton Ashmead Barossa Valley Cabernet Sauvignon 2010Produced from the Ashmead block which is based on 1944 plantings with an increase in planting densities back in 1997. 18 months in new French oak. 14.5% alc. pH 3.5. TA 7.3.

Dark and curranty. Needs a slight chill lest it become fat. Only a hint of blackberry on the nose to give away its varietal mix otherwise its just chocolate. I like the extra tannins here though. An extra layer of dry intensity to carry it all through. Unlimited generosity makes this a very affable wine and utterly, utterly Barossan. A bit shapeless but lots of flesh.17.7/20 92/100


Elderton Neil Ashmead Grand Tourer Barossa Valley Shiraz 2010
Sourced from a biodynamic block on the Elderton vineyard. Open fermented, 12 months on gross lees in new French hogsheads. 13.5% alc. pH 3.49. TA 6.4
Wilder and more spice. Animale and bark. Such a step out from the other wines here. Darker, wilder yet not richer with a real meatiness. Much more mid weight with a delicious texture and the finish continues to evolve. Some may turn away from the meaty, fully rich style but it is very satisfying. Not about concentration, more about old vine sophistication. Very clever. 18.5/20 94/100

Elderton Command Barossa Valley Shiraz 2010
Sourced from a plot of 1894 plantings that crop at just 1 tonne/acre. This block is one of the largest single blocks of 100 year old plus vines in the world. 18 months in new American oak and then older oak for a further 12 months. 14.8% alc. pH 3.35. TA 7.0.
So much coffeed oak. Oakasaurus. Beyond the oak is black fruit, more oak and super rich plums, finishing warm. Homogenous, super click and an absolute caricature, I can appreciate the style but the added acid, missing tannins and alcohol warmth gives this a certain predictability and simplicity that detracts. Do you punish a wine for being this predictable? I don’t know if I can. But gee it is a challenging wine to drink. The score is a nod to what it can become, whilst also an acknowledgement that drinking it now is folly. 17.5/20 91/100+