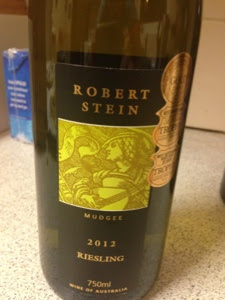 As has become the norm for this Riesling, it comes replete with several shiny medals on the label, reminding how clever this region-defying wine is.

One of the most recent awards bestowed in this wine’s direction was given to its maker, Jacob Stein, who was crowned the 2012 Australian Gourmet Traveller Young Winemaker of the Year. He’s considering to be Mudgee’s hottest winemaker.

Speaking of Mudgee, you’re right in pointing out it has never been known for its Riesling, yet its often quartz flecked soils; altitude influenced, semi-cool clime and reasonably diurnal temperature variation should mark it as at least carrying some potential.

Whilst I’m not convinced that this is the best vintage of the Robert Stein Riesling (a wet year in Mudgee) it it still a good drink, a tropical, forward smelling Riesling with a little tinned pineapple and some quite early toastines, over a very firm, incredibly intense, limey palate. That palate intensity is admirable really, the acidity soft and natural even despite how much acidity there is.

Superb concentration even despite the vintage, it’s hard not to be impressed by this.