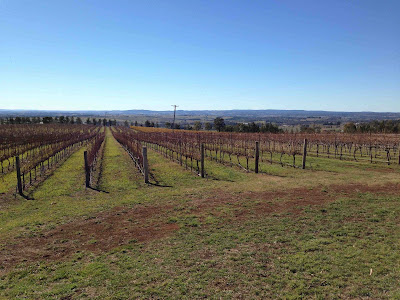 ‘The region is planted to 60% red wine varieties and 40% white wine varieties – which says something about the region but also about what the national palate is drinking in the 21st century.’ Orange Vignerons Association

The first part of that statement completely floored me. I’d always assumed, given my own perception of the region, that Orange was principally a white wine region, with reds a distant second.Instead, Orange is largely planted to Cabernet Sauvignon and Shiraz (in reds), and Sauvignon Blanc and Chardonnay in whites. Following that, it is Merlot, Pinot Noir and Cabernet Franc which make up the bulk of the remaining red plantings, with Riesling, Pinot Gris and an assortment of other varieties rounding out the whites.

Yet, after spending several days last weeks ensconced in all things Orange wine, I’m not actually convinced that the above varietal mix – and particularly the 60:40 red to white split – is truly the ideal one for Orange.

Further, I think the issue starts with that opening statement.

By stats alone, the 60/40 split of red to white wine doesn’t actually represent what the ‘national palate is drinking in the 21st century’ at all. In fact, according, to Australian Bureau of Statistics figures, Australians drink 40% white wine and 32% red wine/rose in 2012 (figures here). If you count in sparklings (given that we drink predominantly white sparklings locally), the white skew creeps up to 46% of wines consumed.

Let’s call that a potential imbalance from the start.

In response to this perceived imbalance, you could argue that, climatically, Orange can support a rather wide spread of varieties, red or white, simply by the huge variations within the region itself. Orange can thus follow trends with whatever variety is fashionable.

Crucially, helping this thought along, one of the most unique features of Orange is that the regions boundaries are delimited by more than just lines on a map – it is believed to be one of the only regions in the world to be defined by altitude, with only fruit picked from vines above 600m above sea level (and located within the physical boundaries) may be considered to be from Orange (beyond that it is classed as the much less sexy ‘Central Ranges’).

What’s more, vines are planted at anywhere between 600m and right up to almost 1100m, a spread of altitudes that offers a correspondingly broad range of different climatic conditions.

At 600m, for example, the MJT (Mean January Temperature. A well known indice used to compare wine region climates) is close to 21.5C, a figure which is comparable to the Clare Valley. At 950m in altitude, however, the MJT is more like 18.5C, which is closer to the chilly, sparkling wine and Pinot Noir country of the Macedon Ranges (I’m using figures pulled from the Belgravia website).

The variation doesn’t stop with altitude either, as the Orange region also has a wide range of different soil types. Many of those soil types have been derived, in some way from the activities and erosion of Mount Canobolas, an extinct volcano that the centrepiece for the region (and a tourist attraction itself).

Perhaps the most notable of these volcanic soils is the rich red, basalt origin clay loams – a particularly fertile soil type traditionally revered for orchards. Beyond this richer soil we also see  more marine derived limestone, along with relatively infertile, free draining, sand, gravel and silt, with all of these soils found at varying depths throughout the region.

Further, when you also include the influence of slope and aspect, you could probably argue that just about anything could grown in Orange.

The problem with growing ‘anything’ in Orange, however, is that it’s still a proper, occasionally marginal, cool climate region. They get snow as late as November, as just one example of how marginal Orange can be. Those fabulous red soils can be vigorous too, and the extra vigour, when coupled with consistent rainfall and humidity throughout much of the growing season, make for the perfect conditions for diseases like downy mildew and botrytis .

To combat this, Orange growers have to be particularly careful about site selection, they spray often and do things like leaf pluck and shoot thin, all in an effort to ripen grapes and keep them disease free.

Regardless, given such slightly challenging conditions, the dominance of late ripening Cabernet Sauvignon and pals as the key varieties in the region really does seem slightly perplexing, particularly given that such late season grapes are always going to be a challenge to get ripe in a cool region anyway. It’s like the Orange vignerons are trying to make things hard for themselves.

You can see the challenges writ large on the wines too.

After having tasted plenty of Orange Cabernet last weekend it became incredibly obvious that all but the most vigilant vignerons had problems with ripeness levels. Green, astringent tannins and minty fruit was in abundance. More than that, too many wines traded off actual physiological ripeness for tannins and linearity, resulting in one dimensional – if finely tannic – and quite hollow wines.

Conversely, the ripe wines of the same varieties often looked light and lacked any body either, making them just as unsatisfying.

An important thing to note, however, is that I’m not condemning all Orange Cabernet/Merlot/Franc, as there are some excellent examples out there. In fact, I’ll be putting up some tasting notes tomorrow of several genuinely high quality wines, all of which just reinforced the notion that Orange Cabernet and Bordeaux reds, from the right spots, can be really good.

Rather, what I’m saying is that the dominance of Cabernet et al as the hero variety(ies) of the region is just not right. It doesn’t quite fit.

Shiraz, however, in the warm spots? Much more broadly appealing. Again it has to be the right spots, as there are few worse things than unripe Shiraz,yet this mid-season ripener is certainly much better suited to a cool moist climate than Cabernet. Lovely spicy wines too.

Beyond Shiraz and we end up at Pinot Noir. I must confess to never ‘falling’ for any Orange Pinot Noirs. Ever. I’ve had plenty, but never really loved any of them. Until last weekend.

Suffice to say that the best Orange Pinot Noir, from the best ‘higher slopes’ vineyards, are easily NSW’s finest, with the top wines carrying a Pinosity only shown in ‘premier’ Pinot regions like Mornington or the Yarra. Mark my words, there is some good Pinot here (more to come in the tasting notes tomorrow) and they’re much more palatable beasts than the equivalent Cabernet Sauvignons.

Pinot is definitely not the answer to all of the regional questions, especially given that it looks rather dry-reddish in the warmer lower vineyards. It’s a string to the Orange bow.
Finally then, we end up with the true star of Orange – Chardonnay. Forget herbal Cabernet Franc or aneamic Merlot, it is Orange Chardonnay, with its blinding – but not aggressive – natural acidity that is the most distinctive and appropriate variety in the region. Pinot Gris and Sauvignon Blanc give it a popularity nudge too, with Pinot Gris looking notably well suited.What was most interesting to notice last weekend was the vintages available at cellar doors. In many cases the Chardonnays – regardless of price – were 2012s and had only recently been bottled (and rushed to market in many cases). Sauvignon Blancs were 2012 as well (or sold out at a few places). In direct contrast, the Bordeaux reds were typically 2010 vintage or older, often with younger Shiraz that had been pushed out earlier alongside it.

Obviously there are several of these reds that are deliberately kept back – such as Philip Shaw’s No.5 Cabernet, yet still the impression was that the white wines (Pinot Gris, Chardonnay and Sauvignon Blanc) were selling, the full bodied reds were not.

The national palate in action…

(Tune in tomorrow for a few Orange tasting notes).