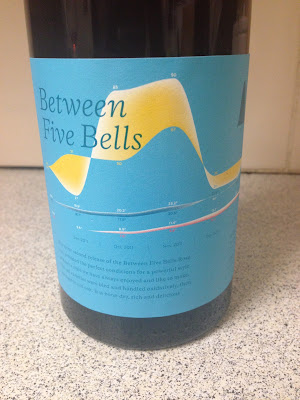 David Fesq usually sets out the aim for each one of his Between Five Bells wines, leaving it then up to us whether we agree (or not). This 2012 rosé is described as ‘a rosé that is dry, with a deep pinkish/ruby colour; that has a light oxidative bite, but is still generous and slurpable.’

Gee, he’s not half bad that bloke. He should write back labels or such…

The only thing really wrong with that description is that he’s overplaying the simplicity – it’s too quirky for that.

For starters, the varietal blend is more like a raid on an alternative variety trial plot, with 40% Shiraz and 40% Pinot Noir complemented by smaller amounts of Grenache Negroamaro, Graciano and a little Chardonnay.

Winemaking wise it’s a little more mainstream, made in a saignee style with pressings bled straight to old oak for fermentation. Still, with no temperature control, no additions (bar a little sulphur at bottling) and oxidative handling, the end result is anything but typical Oz rosé.

Like many an oxidatively handled wine, this needs oxygen to show it’s best in the glass too. A vigorous swirl is not enough, this could really do with a decant. That way you get more of the ferrous, slightly oxidative edged strawberry fruit and less of the meaty wildness. Underneath it’s very dry, with huge amounts of acidity (a TA of 8.2!) competing with the fruit for space, ultimately delivering a chewy, quite serious wine with drive and fruit but also all sorts of odd, furry edges.

Ultimately I didn’t mind a glass of this, but couldn’t quite warm to more than that. Still plenty of intrigue to be had regardless.