Cabernet sideways – a look at 4 interesting Cabernet based reds

Cabernet sideways – a look at 4 interesting Cabernet based reds 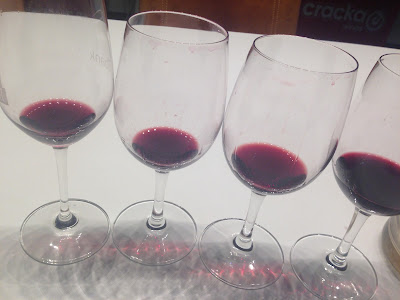 Xavier Bizot – of Terre à Terre – is a crafty man. Crafty enough to know that a good blind tasting, when used correctly, can show just how little correlation there  is between price and premium wine quality.

Nowhere was that more apparent than in this little Cabernet comparison, which pitted 4 very different – yet all very serious – Cabernet based reds up against each other in a proper double-blind tasting.

As you can see by the results below – and as is so often the case – ithe cheapest wine wasn’t actually the least impressive. Far from it. In fact, on tannins alone Xavier’s $35 Cabernet almost took out the title. Suffice to say that the 2010 Terre à Terre is seriously good drinking for under $40. Seriously.

The wines
(Notes as written on the day. My little post-tasting musings in italics).

Ah I love getting it wrong. Or at least seeing a wine in a whole different light. This looked about a billion times better today than the last time I tried it. Maybe I should now go back and retry the 2008 and 2009…

Bright full and ripe – dark black fruit pastilles and lead pencils. A bit indistinct but incredibly plush and round. Oak massaged through the middle but fine tannins. Highish alcohol. Texture is quite more-ish too. A challenge to pick the region perhaps but lovely generosity and balance. The more I look at this the more i like it. 18/20, 93/100+

Le Petit Mouton Rothschild 2010 (Pauillac, Bordeaux) 13.5% $300
This was so obviously moneyed Bordeaux. Lovely form and weight through the palate. But ridiculously priced.Distinctly Bordeaux. Charged with meaty, mushroom and leaf aromatics and looking really quite ripe. Perhaps a bit too meaty, yet the class is obvious the more you look. Has an open airiness to the palate which is quite refreshing. Excellent tannins if not overly intense. Still unfurling, but certainly pushes the boundaries of what is ripe but still tannic. Maybe a little unclean? Great tannins though. Sleeper. A little more definition would make this a star. 18/20, 93/100+
Terre à Terre Cabernet Sauvignon 2010 (Wrattonbully, SA) 14.5% $35
I thought this looked a bit too choc-minty at first. Too minty and full. But the length and tannins? Wonderful. This is only going to get better and better.
Lighter, blue texta and after dinner mints aromas. Perhaps a bit chunky through the middle but with wonderful tannins. Those tannins have a life of their own, grainy and overt and rampant. Wonderful tannins, even if the wine looks just a bit chunky and full. Tannins! Love that structure. Will the wine catch up? 17.8/20, 92/100+
Penfolds Bin 407 2010 (South Australia) 14.5% $55

Odd. Roasted, ‘made’ and quite inferior in this context. I thought this was a 2009 heatwave South Australian red, such was the overt bulkiness and flatness. Ordinary. Bad bottle?

Very open and a bit roasted, the fruit looks very forward and just a bit carmelised. Obtuse tannins and a general feeling of blubbery fruit. If this wasn’t poured in front of me I would have called it oxidised. That’s not quite fair but its still a sweet and flabby wine in context. 16.8/20, 89/100