‘”We’ve had a very good season and it looks like we are going to have a good year,” he said.

“There will be some really good quality fruit, hence quality wines, coming out of McLaren Vale for the 2011 vintage.”

‘A wet and cool season resulted in disease pressures impacting to different degrees across the region. Management of powdery mildew was critical, and there was some early powdery mildew pressure on blocks that did not have the required frequency of sulfur spray. Fruit with powdery mildew tended to be weakened and be more susceptible to botrytis. Later harvested Shiraz was threatened by loss from botrytis.’ (read more)
Jodie Pain, Viticulture Coordinator, McLaren Vale Grape Wine & Tourism Association


‘This was a very ordinary and challenging vintage. The wines are not as rich and voluminous as one would usually expect. The wines are generally lighter and lower in alcohol. Technology and meticulous attention to detail allowed many good wines to be made with decent flavour development and balance. 5/10’
Langtons Vintage Report

It goes on and on (you can read more in Philip White’s typically insightful and wonderfully sceptical account here)…
Never before has there been more contradictory words spoken about a single vintage (2008 aside) than 2011.

Never before has McLaren Vale, a region that rarely faces major disease pressures, had to worry about widespread mildew and botrytis than in 2011.

Never before has it been so very important to ignore everything else and try the wines yourself…
In what has become something of an annual pilgrimage, I headed to the Vale a few months ago for a tasting of the best that McLaren Vale has to offer from 2011, looking at the latest, 2011 vintage Shiraz releases from the Scarce Earth program (what’s Scarce Earth? Best start here and here for context).

I must say that, given the aforementioned negativity and mixed messages, I was genuinely looking forward to seeing what the Vale vignerons had produced. And I wasn’t disappointed…
Obviously I’d tried a few good ’11 wines from the Vale before going – such as Dudley Brown’s Inkwell releases or the Dodgy Brothers red blend – so I knew that there would be at least a handful of gooduns’ to be had, no matter what the general perception. Yet even I was surprised at how many wines I thought were genuinely high quality – the sheer number that you’d probably have picked as coming from an ‘exceptional vintage’ after all…

A word of caution about that proclamation, however. As the Langtons vintage report suggests, good wines were made by good winemakers. Good winemakers, with good viticulturists, who were willing to drop fruit, leaf pluck, declassify and leave whole vineyards to the birds. It was a vintage where you needed to be out in the rows every day – spraying, trimming, thinning and essentially nursing your vines through a very stressful period.

If you didn’t have everything sorted in the vineyard and ended up with shit fruit, or indeed if you didn’t have the skills in the winery to pull it off, then the vintage really was as bad as the reports suggested.

Moreso, the wines are also quite different this year – that cooler, wetter summer meant that the grapes typically lacked the sugar sweetness and absolute flavour impact of a ‘normal’ year, resulting in wines that are lighter and often with more acidity than is typical for the Vale.

In some cases, particularly for wines produced from the warm and windy southern end of McLaren Vale around Sellicks Beach, the cooler season has helped inject the wines with an extra sense of delicacy that I really like – a delicacy that I thought was lacking in some of the 2010 wines. Conversely, botrytis and mildew rendered quite a few vineyards in the cooler, higher, and wetter northern end of McLaren Vale (around Clarendon) as complete write-offs in 2011.

Again, however, a word of caution – that last sentence is (another) generalisation in a vintage where generalisations are as problematic as ever. Personally, I’m still really conflicted, as for every great 2011 Scarce Earth Shiraz I tasted, another middling $20 2011 Vale red passes through the Ozwinereview tasting bench.

Ultimately, in this vintage I think there are but two rules to follow – try before you buy and make a beeline for the most astute, vineyard-focused producers. Is it a great vintage? No, and many of the cheap wines are hardly convincing. For the great producers, however, the results are even better than expected…

McLaren Vale – the most sustainable vineyards in the land?

Putting aside the vintage talk for just one minute, there is another, far more positive thing to discuss – sustainability. Whilst the notion of ‘sustainability’ (and the word itself) is somewhat overused in the wine industry, I think that – in McLaren Vale’s case at least – it has some resonance.

Much of the Vale sustainability push is focused on a scheme known as ‘McLaren Vale Sustainable Winegrowing’, which is effectively a region-wide reporting and assessment program, allowing local growers to measure exactly how they perform in categories such as waste management, biodiversity, pest and disease management, social relations and social health.

This ‘vineyard report card’, as we’ll call it, is then compared to the regional ‘best practice’ indices, with growers then given ‘practical pathways’ to help their own vineyards to hit those regional high points.

Obviously, when viewed in isolation, such a program can seem like just another layer of subtle monitoring and quasi-regulation, yet given that it was written by a group of local growers, for local growers, the scheme seems to be well received.

Indeed the ultimate purpose of such a region-wide assessment program is simple – McLaren Vale wants to maintain/improve on its reputation as the source of the highest per litre wine exports of anywhere in Australia (as of 2011), with the thinking simply that if the quality of the vineyards (and by extension the fruit) is higher throughout the region, then naturally prices will go up and growers will prosper.

Dudley Brown, prominent local grower/winemaker and one of the drivers of both the Scarce Earth program and McLaren Vale Sustainable Winegrowing, credits Warren Randall as one of the instigators of this push towards higher quality fruit, noting that many have been inspired by Warren’s ‘retooling’ of his Tinlin’s vineyard towards A and B grade grapes, with the resultant success because of it (read Dudley’s account here).

With some 145 vineyards – representing 38% of the McLaren Vale crush – now participating in this assessment program, it seems that many share the desire for best practice too. Indeed there is a suggestion that, in the future, only wines produced from vineyards in the McLaren Vale Sustainable Winegrowing scheme  (which is conducted in conjunction with not only local growers but also the GWRDC, the University of Adelaide and CSIRO) may be eligible for the McLaren Vale wine show, a notion that really pushes the initiative.

Obviously it is still early days – and we’re talking more about an assessment program than an actual action plan – but given the detail and the clear push towards best practice sustainable viticulture (now there is a buzzword heavy phrase!), I’ve got no doubt that McLaren Vale is well on the way to being crowned the most sustainable winegrowing region in the country.

Now, back to the 2011 vintage McLaren Vale Scarce Earth Wines.
The following wines were all tasted double blind in small brackets (the wines grouped by geological districts from the Scarce Earth map) in McLaren Vale recently with the identities of the wines revealed only after tasting.

What was most satisfying was to see how many single vineyard wines that I rated highly last year and again rated highly this year. Great wines really are made by the best grower/producers…


Oh and an interesting note – Michael Fragos (who helped coordinate this year’s Scarce Earth program) mentioned that a higher proportion of wines were rejected from 2011 than the 2010 vintage, with too much oak being the main criticism. In other words, this wasn’t a year for blooding new barrels, simply because the lighter fruit couldn’t cope with it.

Thankfully I didn’t encounter too many overoaked wines either with the balance largely quite good.

As usual, the production notes for these wines are in italics. My reviews are all as written on the day (I’ve just tidied up the grammar). 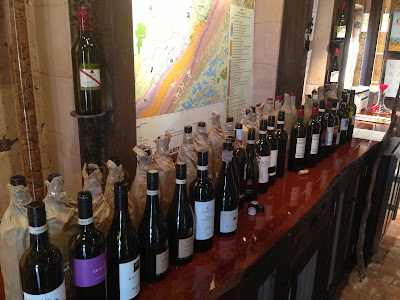 Chapel Hill The Chosen House Block Shiraz 2011
House Block, 1 Chapel Hill Road. Planted in 1977. Wine spent 17 months in 17% new and the rest 2-4y year old French oak. 14.1% alc. No fining or filtration. $75. 1969 bottles produced. District 9.
Confected, meaty, skittish. Brackish and even a fraction bitter. Somewhat unwelcoming. Alcoholic and a bit firm. So uncompromising! This should come together. Much acid. Much flavour. Such an entrancing wine! Much to come.  18/20 93/100+