With Wynnsday just over a week away, it’s time to cast our gaze in a Wynns-ward direction

Having tried the wines this week – and my clairvoyant hat for a second, I’m tipping that there will be no shortage of attention given to the new 2010 Wynns John Riddoch. It is, to my palate at least, amongst the finest John Riddoch releases since the 2004 and back to the 1998 before that. It’s a superb Cabernet that will live forever. Even despite the price hike I’d say it is worth a bottle or two.

The other wines in this new lineup are more than handy too, even if they aren’t always to my taste. Quality is very high indeed.

There is, of course, one glaring exception. One wine that is not like the others. Unfortunately for Wynns, that wine is arguably the most important one too.

I’m talking about the Black Label Cabernet, and this year it’s from the 2011 vintage, a year that really was a particularly tricky one in Coonawarra. So tricky, in fact, that quite a few producers are skipping it altogether, moving right along from brilliant 2010 to (also brilliant) 2012 and forgetting the light, leafy wines of 2011 ever happened.

Of course not everyone struggled, and some of the pre-release 2011’s I tried when in Coonawarra recently weren’t that bad. Yet there is no disguising the fact that the wines are very different from the vintages either side, and often not for the better (like with the Black Label).

Anyways, let one wine not dictate the form of the release, for there is much goodness here.

My notes below are from a serious of tastings, with most wines looked at on Friday and then again on Monday afternoon – largely to see how they progressed. I’ve included my notes from a shorter tasting at the winery back in early June when I tasted some of these as pre-releases, along with a look at the Messenger last week.

I’m also interested to hear what of these wines would you consider buying – a Black Label to keep the vertical going? White Label Shiraz for bargain drinking? Let me know.

Wynns White Label Shiraz 2012 13.5% $19.95
Woah. What a release this is! Perhaps the best Wynns ‘White Label’ Shiraz in years and in classic form. Pulpy, juicy but with restraint. Full and vibrant purple flavours. Lovely easy drink really and even after being opened for 3 days it still looked bright and energetic. Really good. Buy. 17.5/20, 91/100
Buy online: Dan Murphy’s, Wynns Website

Wynns Black Label Cabernet Sauvignon 2011 14% $44.95
Immediately a different wine. There is a hint of greenness (though not necessarily an unripe wine), the nose more restrained, leafier and with tobacco and much less dark fruit. Actually the key ingredient missing here is fruit, for the shape really isn’t all that bad. Lots of acidity on the palate and an astringency to the tannins that aren’t completely desirable, but it still feels carefully massaged, mid-weight and clever enough. But in the context of the wines around it, this is a somewhat inferior beast and ultimately hard to warm too. 16.3/20, 87/100
Buy online: Dan Murphy’s, Wynns Website 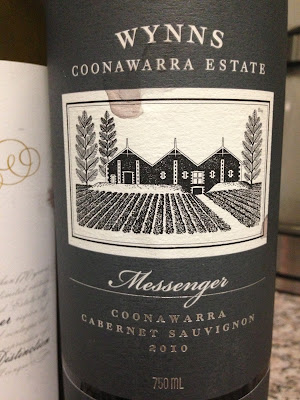 Wynns Messenger Cabernet Sauvignon 2010 13.5% $70
I’m still not quite convinced by this. Don’t get me wrong, it is still a very nice wine, yet against the Riddoch it feels a little docile, a little too purple and with an almost oak drawn softness. I think I just want a bit more drive, though many will warm to the almost elegant nature. Somehow I think I’ll be proved wrong in years to come. 17.7/20, 92/100+
Buy online: Dan Murphy’s, Wynns Website

Wynns Messenger Cabernet Sauvignon 2010 13.5% $70
(Tasted on the 9th July)
Drawn from the dry-grown Messenger block, planted in 1985.
Deep and richly purple nose. Rather fruit forward and berried sort of nose, almost as if there is some Shiraz in there. Underneath its mid-weight, lithe, lightly tannic and quite earthen, very polished but also awfully Shiraz-like. Tannins are an afterthought too. Soft and subtle but pleasant, I think I’d like just a little more Coona character. 17.5/20, 91/100+

Wynns Michael Shiraz 2010 $149.95
Oak. Lots of coffeed oak. Oak tannins. Really full and plump and, well oaky. Has more length than the white label wine but gee that oak! I do appreciate the power and weight of this, and underneath the timber it is long. Very long. It needs years really, and that mid palate is mighty attractive regardless. My score here is a little in-between, and for many it may seem like point pinching. I still wasn’t quite in love (but dipped my lid regardless). 18/20, 93/100
Buy online: Dan Murphy’s, Wynns Website

Wynns Michael Shiraz 2010 $149.95
(Tasted at the winery in early June)
30% new French. Super dark. Block 14 is the background to this wine, according to winemaker Luke Skeer, used to ‘give a silkiness’. Almost tar and graphite richness on the nose. Sexy oak. Licoricey middle. Withering concentrated fruit. Lovely full power. Maybe too much oak? Lovely powdery tannins. Will live forever. 18.5/20, 94/100

Wynns John Riddoch Cabernet Sauvignon 2010 14% $149.95
Wow. Just wow. Lovely hint of leaf and a little undergrowth – a proper Coonawarra Cabernet, with distinctive varietal characters. Superb tannins. Tannins tannins and more tannins. Smooth, ripe, fine tannins and a restrained palate. Wonderful length. Superstar qualities. Did I mention the tannins? They’re bold, firm, even a little too dry and astringent at times. But gee it makes for a magnificent wine. The sort of wine that you can taste for minutes after… 18.8/20, 95/100
Buy online: Dan Murphy’s, Wynns Website

I'd have to say that if $149 is the asking price for Riddoch or the Michael then they have priced me out of the market, regardless how good they are.
With 2010 being such a good year there are lots of other wines I would (and have) put my money into. I've bought some Balnaves Tally, Penley Reserve, Majella and Leconfield so far.
I'll be really interested to have a look at the 2010 Katnook Odyssey when it comes out as the Amara vinyard Cabernet was the standout for me at their cellar door in October last year.

I'll reserve judgement until I've tried to 2011 black label, but it is unlikely I'll be buying much 2011. I did try a cask sample of the Majella which looked pretty good. The problem that the 2011s have is that we know 2010 was a great vintage and the expectation is that 2012 will be pretty good also.

Ambitious pricing, no question about it. I think they'll have no problems selling the Riddoch – but that Michael? Much harder sell…

Is Wynns day of any relevance anymore?

Back in the day I would be keen for release and pop down to Summerhill or wherever to try asap but these days? I don't have a single one in the cellar although I did mean to buy some 2010 black label CS, just never got around to it.

There is some serious competition out there for the wine consumer's dollar and Wynns don't seem to make a compelling enough offer.

The price rises are hard to stomach, but the 2010 wines are pretty special. Special enough to make Wynns cool again? Probably not…