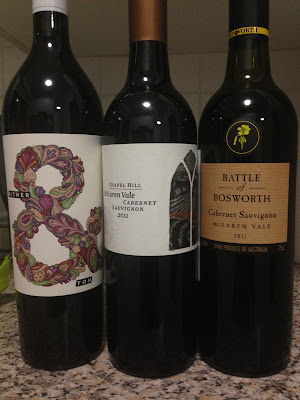 Whilst Shiraz takes the lion’s share of attention in McLaren Vale, it is Cabernet Sauvignon that is the second most important grape (judging by tonnes crushed in 2012). Arguably Grenache should be second as it is probably better suited to the Vale, but Cabernet is both much easier to sell and can produce some generous, full-flavoured wines (if not always particularly varietal).

With that in mind, the expectation with tonight’s lineup of McLaren Vale Cabernet was simply to find good drinks, leaving my varietal expectations at the door. The only thing working against me was the wines themselves – 2011 was hardly the easiest vintages, and these wines occasionally looked a little harder and a little leaner than I’d really like. Still, these are all well made Cabernets, if in a style that is so far from the normal Vale Cab mode that they barely deserve comparison with other vintages…

All three of these were tasted single blind over the space of a few hours. My notes are as written blind, with a ‘post reveal’ addendum in italics :

Chapel Hill Cabernet Sauvignon 2011 (McLaren Vale, SA) $30
All of the 2011 Chapel Hill reds look ripe and even, with Michael Fragos proudly declaring that they were more rigorous than ever in ’11. This wine is quite an achievement.
Deep maroon purple. Quite a deal of lavish new oak on the nose. Rich and buxom. Oak bolsters the palate too, grainy and richly extending out the palate, capped off with light fine tannins. There is an awful lot of richness here, with only the faintest herbal streak through the finish to proclaim it as from a less-than-ideal-year. Pretty impressive really. 17.5/20, 91/100

Hither & Yon Cabernet Sauvignon 2011 (McLaren Vale, SA) $45
I’m looking forward to trying more of these Hither & Yon reds as they show much promise (just view the level of detail on the website). This, however, looks clever but clumsy.
More herbs here given the context. Less definition on the nose and a certain thin edge to the palate. There is lovely liqueured berry juiciness through the middle, if warm and slightly bitter to finish. The more I looked at this the more alcoholic it looked. Nice plump fruit but feels a little awkward. 16.8/20, 89/100

Battle of Bosworth Cabernet Sauvignon 2011 (McLaren Vale, SA) $25
Intriguingly, this carries some vine dried fruit as part of the blend, which I think gives a fullness to the tannins that I really like. I can’t quite get over the lean fruit, but the structure is grand.
Perhaps the most forward of the wines here with a slight hint of meatiness and volatility, topped with just a smidgen of something wooden. The tannins here are probably the most serious, the palate firmly extractive and well built. Still can’t but miss the weediness on the nose, but the more I look at this the more I appreciate the structure and length. 16.5/20, 88/100+