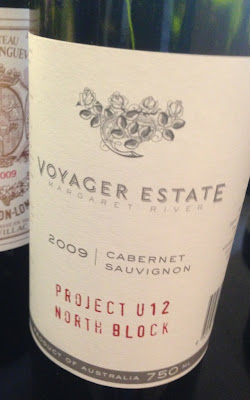 A new wine in the Voyager lineup, this was served at the end of what was a typically fantastic Voyager Estate masterclass held today (notes on that to follow).

Following in the footsteps of the last project wine (the Project 95 Chardonnay), this is sourced from a single vineyard planted to the ‘Houghton’ clone in 1995, the vines in which are deliberately worked hard to lower yields and ensure consistent fruit – think leaf plucking, shoot thinning, green harvesting, fruit sorting and the like, with such techniques deliberately employed to produce quality with less regard to cost.

You can see the commitment in the wine too, as it tastes like the absolute distillation of Voyager Cabernet – the beating heart of the standard Cabernet Merlot, laid bare.

What I like most about this wine is the definition. It screams Voyager Cabernet, with a pencilly, sharply detailed nose of cedar and briar and savoury black Cabernet fruit. There is an almost regal Cabernet-ness here that is translated on the powerful, ripe, fully filled tannic palate, the style obviously quite big, yet stiil lso varietal and plenty crisp to finish.

Actually the sense of rawness here is perhaps the only downer, a suggestion that, whilst all is in place, the lines are just a little jagged and warmish. Still, this is special Cabernet that couldn’t be anymore Margaret River-ish if it tried, a wine built precisely and perfectly in nearly every way. Plus it tastes pretty good too.

MrG,
Good to see them laying their beating heart on the table for all to see.
There is a fair bit of mis-information/understanding about historical Cab clones in WA. Often it is poor or lazy use terminology on the part of some within the industry which leads to this. Specific Houghton clones (where every vine is directly reproduced from a single source vine) haven't been generally available as planting material until very recently (the last year or two). These are the ones identified as superior through a long process of trials and elimination by the WA Dept of Ag using panels of local winemakers for tasting feedback. Any vineyard planted to vines descended from Houghton's early plantings in time to produce a 2009 wine would be really from a Houghton's Massale. As I understand it, this was the case for pretty much all the Cab plantings in WA up until sometime around the early 90's when various 'SA' clones were approved (125 and 126) as well as some others which were never widely picked up on from UC Davis ++.
As Coonawarra was then the more famous Cabernet region, the SA clones were whought to be superior, but didn't really set the world on fire in WA. They did have one advantage – the vineyards didn't have a lot of rogue Cab Franc and Malbec vines spread through them. You'd be amazed how long some of these rogue vines have lasted. Field blends are cool, but only when the varieties all work well and ripen at around the same time!
The Houghton's Massale (minus rogues) has the track record of making WA's best CabS and we look forward to wines made from the specific clones selected out of this but it may be a while before anyone has decent vineyards with enough vine age to do so.
Cheers Simon B

Ah right! So when they say 'Houghton clone' they really mean Houghton massale!

It always intrigues me that so little thought is given to Cabernet (or Shiraz) clones, whilst everyone can talk about the differences between MV6 and 777…

Do you know anyone who has planted some of the newly selected Houghton clones yet?

Isn't it funny how things happen – after posting above last night, I opened my mail this morning to find a letter from the WA Dept of Agriculture and Food on this very topic and a copy of their report 'Selections of the Houghton clones of Cabernet Sauvignon'.
The main trial blocks are at the Justin Vineyard in Frankland. I think that a few wineries got some clones last year, but they are only really available for commercial scale planting this year. As I understand it they would have been available a few years ago but things got held up for a few years by the winemaker/consultant who now controls the vineyard not wanting to release material to the rest of the industry. The report is online at: http://www.google.com.au/url?sa=t&rct=j&q=&esrc=s&frm=1&source=web&cd=4&cad=rja&ved=0CEYQFjAD&url=http%3A%2F%2Fwww.agric.wa.gov.au%2Fobjtwr%2Fimported_assets%2Faboutus%2Fpubns%2Fbulletin4843.pdf&ei=O78SUpbsMsiIrAfF6IDQBg&usg=AFQjCNFQu3XeD21oM8BS8LaWeWyfnxQFwg&sig2=T9RHJFDl95OnACeaOstWrw&bvm=bv.50768961,bs.1,d.aGc

as a PS – almost everyone in the WA industry talks about vineyards planted to what we're calling the Houghton 'Massale' here as being planted to the Houghton 'Clone'. We generally know what we mean, but in the future when the clones are actually out there we'll need to make more of an effort with our terminology.
At Willow Bridge, as the vineyard was planted in 97-98, we're 90% certain that all our Cabernet is SA 126. 126 performed poorly in their trials versus their best Houghton clones (there were originally 20 Houghton clones – the lesser ones have been abandoned progressively and they are now concentrating on just four – I'm not sure if there was a wine made from a massale block of all 20). Although the trial wines were all grown in one vineyard in Frankland, most in the industry still assume that the four isolated Houghton clones will perform better than 126. As the clones were being held up (indefinitely at the time), we grafted part of a block over to the classic Houghton massale (without the rogues) a couple of years ago to see if we were missing out and early indications are that in our vineyard, the Houghton material gives less blackcurrant fruit and more of the classic SW-WA dried herb and olive tapenade characters. That's the first wine off them, so I wouldn't bet the house on that just yet.
We also pulled up part of a nearby block and replanted it to the Houghton massale. I doubt it is important, but there may be some difference between Houghtons on 126 roots and Houghtons on own roots. Of course the 126 roots will always be 16 years older, so that's hardly an accurate experiment either….but we may learn something over the next few years.

Whilst it didn't perform as well above root level, what is 126 like as a rootstock? Still of benefit, or better off starting again (like they are doing in Coonawarra, scene of mass replantings instead of grafting)?

I don't think anyone really knows for sure. I think also with rootstocks, what works or doesn't depends on the dirt etc. I'm sure we'll have a better idea in a few years time.

Thanks Simon for that run down on Cabernet clones. I think i know know why I'm not 100% in love with a lot of MR Cabernet. It could be the Houghton material, since I prefer blackcurrant fruit over dried herb and olive tapenade character.

Do you think the bay leaf character in a lot of MR Cabernet is also clone specific? Or is that just terroir? I see more choc-mint through to menthol/eucalypt in Coonawarra Cabernet, and less of that in MR, where I usually get more bay leaf and that olive tapenade.

Please read "I think I now know why" – a bit of a tongue-twister.