Bill Pannell, founder of Moss Wood and Picardy, dropped by today, bringing with him these two new super-premium Picardy wines to help brighten up my day.

As ever Bill is a polite veteran of the industry – who has seen much come and go over the years – and his wines carry a sense of clarity and purity that is wonderfully old fashioned, even though the wines are much more contemporary than that.

What was most pleasing to see was simply how delightfully perfumed, vital and energetic the Merlimont was in particular. It’s obviously still settling into its skin at present, but the wine has long term promise written all over it (and plenty of style). 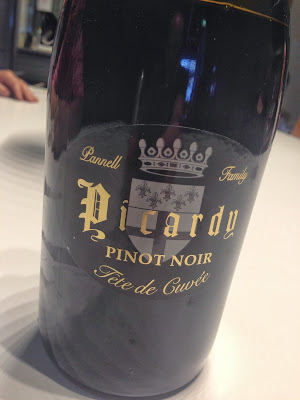 Picardy Tete de Cuvee Pinot Noir 2010 13.5% $60
‘Tete De Cuvee means the best of the vintage. This wine is not a reserve wine made in the usual method of selecting the best barrels for separate bottling. Instead, a portion of the vineyard receives more vigorous crop-thinning and leaf plucking, and the wine from these grapes is made with greater emphasis on structure and ageing potential.’

I’ve always thought that this was a barrel selection, so it was news to me that this is a separate wine all together. 33% whole bunches are used here, and it has always been a masculine, meaty and structural Pinot Noir that can be quite overt, yet often quite satisfying because of that.

This vintage it looks particularly smoky, sausagey and whole bunch meaty, the wine built around  firm extraction and quite robust tannins. It’s perhaps a fraction too big for mine, but it should age nicely, though in something of a dry-red vein. Interestingly, Bill believes that the textural weight has improved on this wine more recently, as the family are now putting more lime on the vineyard which has helped vineyard health, and it certainly looks a little plusher than in many years past. 17.8/20, 92/100

Picardy Merlimont 2011 13.5%
A blend of 55% Merlot, 23 % Franc and the rest Cabernet Sauvignon, this has historically been a little known oddity for Pemberton, the style frequently lean but always interesting. I remember being wooed by this when picking it up cheaply in Pemberton about seven years ago but have rarely seen it since.

Actually, the story behind how this came to be is interesting too, as Bill explains:

‘We had the usual Cabernet Merlot franc blend‘ he said. ‘But the Americans said that to be a success we needed to have a name. Rather than just use the same blend we started afresh, altering the components and leaving the wine in wood for two years. The Americans didn’t buy it, but the Asian market loves it’
It smells Merlot-laden too, with cool mintiness mixing it with the high toned red fruit of the Franc. It’s probably the most translucent Merlimont I’ve had actually, prettier and more vibrant than many. There is still a whiff of eucalypt in there, which isn’t going to appeal to all, but that’s beside the point. The real highlight is the Merlotriffic palate, which has red dirt, red fruit and lovely long spicy tannins. Graceful tannins they are really, punctuating the palate with the fullstop in exactly the right spot.

Long, perfumed, balanced – this is just lovely cool Merlot based red wine really, that is only going to look even better with more bottle age. I liked it muchly. I even like that hint of eucalypt – its a character that tells you this is from Pemberton, land of big trees.