Can you make great ‘conventional’ or ‘commercial’ wines without using preservatives?

It’s a rhetorical question, but one that the Australian wine industry hasn’t really answered.

On one hand, you have natural wines – built around the ethos of sustainable grapegrowing, and use as few additives as possible (I’ve defined the concept a little more here). On the other hand, we have the much demonised ‘conventional winemaking’, which is, quite simply, about making a good wine via whatever means necessary (within reason).

In the middle of the two sits ‘preservative free’* wines which are, by nature, simply wines made without the addition of preservatives (and by preservatives I am largely just talking about sulphur dioxide or SO2).

Of course the amount of preservative used in wine production is bugger-all really. Measuring in parts per million (ppm) of free SO2, we’re looking at a maximum allowable rate of just 160 ppm for EU standards and 250ppm for dry wines in Australia. To put that into context, the upper limit of free SO2 for EU dried apricots is 2000ppm…

You could thus argue that using a little sulphur is so innocuous (and ancient – it’s been used in wine production since roman times) that it barely raises a mention. Further, just to blur the issue, many of the world’s great natural wines are made using (typically small) additions of preservatives even though the issue is as thorny as the definition of natural wine itself (and lets not get started on the topic of natural wines made from grapes that are farmed conventionally).

Still, it brings us back to that question – can we make great ‘conventional’ wines without preservatives?

You’d have to say that many have tried to answer that already, borrowing plenty from the natural handbook in the process, with producers like Temple Bruer and Botobolar making preservative free wines from organic vineyards for more than a decade. Further, the most ‘conventional’ makers have had a stab too, with the Hardys ‘No Added Preservatives’ range now multiple vintages old.

Crucially, however, what is missing from all that lot is the ‘great’ bit. That’s not meant to be rude – as we’re talking about clean, varietal, well made wines on the whole – but, as a bracket, so many wines are just a tad simple.

Of course there are exceptions to such a sweeping statement, and I have to single out David Lowe’s wines as examples of the better side of the preservative free genre. Yet still, on the whole, most preservative free wines are just off bronze medal – serviceable, sound if lacking a little excitement, the absolute quality somewhat compromised by intent.

Which brings us rather nicely to this wine: 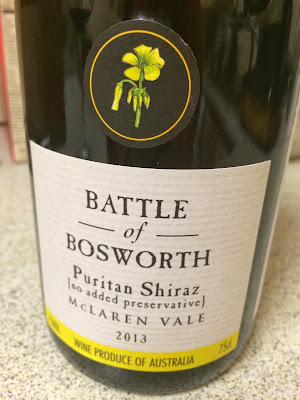 Drawn from a trio of certified organic vineyards located in the warmer, southern part of McLaren Vale, this was fermented in tank and bottled soon after it completed malo, the style deliberately ‘joven’ in inspiration.

What makes this Shiraz interesting is just how ‘normal’ it is – it’s just a very young, very juicy Vale Shiraz, with deep blackberry fruit flavours in the inky, tarry fruit-bomb end of the flavour spectrum. Importantly it doesn’t feel overripe either (just fruity), capped off with some light grape tannins for good measure.

I thought there may been some CO2 left in the bottle here, a tool used to help give a little lift (David Lowe swears by a little CO2 in his preservative free wines) yet Louise from Battle of Bosworth assures me not. Still, it feels barrel-sample fresh, which is always admirable in a wine made without relying upon SO2 as an anti-oxidant (though Louise also believes that the Puritan ages better than you think)

The only thing that distracted me about this wine is that nagging question of what might have been – what if it spent some time in oak and was given more time on skins? What if the ‘preservative free’ compromise was dropped in favour of just making this the best joven Shiraz possible?

Regardless, this wine serves a purpose – an example wine that is not natural (though organic and made with minimal interventions) and is closer to ‘conventional’ South Australian Shiraz than much of the genre. It’s a wine to address my question about whether great ‘conventional’ wines can be made without preservatives, delivering the answer in one simple way.

By being genuinely tasty.