‘Only my wife calls me William, usually when I’m in deep shit. William!!’

That’s 5th generation Hardys family member Bill (William) Hardy putting an entertaining spin on the context for Hardy’s new William Hardy range. As you can gather, the range is named after Bill, even though he’s clearly a Bill rather than a William (but William sounds much more prestigious, naturally).

What is most interesting about calling the family naming of this range is that, unlike the Thomas Hardy and Eileen Hardy wines, Bill has neither retired or died recently. Perhaps that makes him an anomaly, or, more likely, just demonstrates that this range is a rather different beast compared to Eileen and Thomas.

For one, these wines aren’t selling at icon prices – just $21 will get you a bottle (sometimes with change if you buy on special). Like Bill, the wines are meant to be openly affable and drinkable immediately – regionally expressive with a ‘new world nose and mid palate but with an old world savouriness’.

For all of the intent, the biggest challenge with this range is that they’re just  bit too spotless – big company wines that taste like they’ve been made for a pricepoint. I’m being picky, of course (and the Cabernet is really quite handy), but a little extra character would make many of these a shedload more interesting…

All of these were tasted at the launch event in South Australia and then again back at home. All of the scores went up at home, except for the Chardonnay. Background notes are in italics. All wines have an RRP of $21. 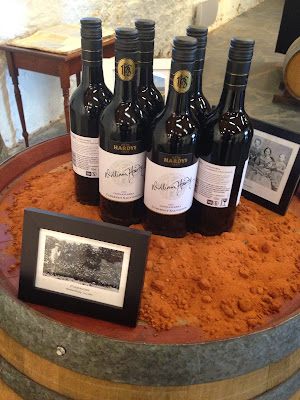 RS 3.5, TA 6.8, 12.5% alc. 94% Sauvignon Blanc 6% Semillon. Produced from 10-12yr old vines yielding  6-8t/Ha. Fermented in stainless steel. ‘I’m pretty pleased that this is a little bit more full bodied than Marlborough’ according to Tom Watson, Hardys white winemaker.
Very much in the lemon/citrus end of the spectrum, no grassiness to be seen. Generous and full palate with chalky acidity. A fraction generic but with flavour and fullness. Certain to win fans. 16.8/20, 89/100
Hardys William Hardy Adelaide Hills Chardonnay 2012 (Adelaide Hills, SA)
13% alc. ‘We really work the lees hard to get more weight… using it to bring up a creaminess… $15-$20 Chardonnay is no mans land.’ Tom Watson
A Chablis style apparently, yet it has been picked a little late for that. Minimal oak influence in the scheme of things, with an odd sort of contrast between quite and generous fleshy white peach fruit and a splash of pineapple juice – it’s not sure whether it is a ripe Sauvignon Blanc or a Chardonnay, though finishes crisp and clean. Net result is simple and lacking.
15.5/20, 86/100
Hardys William Hardy Coonawarra Cabernet Sauvignon 2012 (Coonawarra, SA)
14% alc.

Sourced from vines on three of the ‘typical’ Coonawarra soil types (terra rossa clay over limestone, transitional brown rendzina and the ‘black goo’ black rendzina), this is 90% Cabernet with 10% Merlot – a handy mix for Coonawarra reds, just needing to swap out the Merlot for Shiraz…

What I like about this wine is that it has some of that open-fermented, basket-pressed, silken richness and shapely tannins. Gently fruit-forward and generous in that modern vein, it is perhaps a little simple and juicy initially, yet finishes quite firm and nicely extractive.

Ultimately, once the puppy fat of youth settles down, you get the feeling this will be a handy, well priced Coonawarra Cab that is worth hunting down. 17.5/20, 91/100+ Easily

Hardys William Hardy Barossa Shiraz 2012 (Barossa, SA)
TA 6, 14.5% alc.
The last straight Barossa Shiraz under the Hardys name was back in the 1950s and since then it’s all been about McLaren Vale Shiraz. When Hardys bought into BVE in the 90s it was further off the table. Now that Delegats owns BVE Barossa Shiraz is apparently ok again.
Plump and generous, this looks very much like a barrel sample – bright purple fruits in a fleshy mode. A mere babe. there is something quite predictable about the black plum fruit and vanillan oak of the style, though it’s commercially very attractive. This is likeable, if slightly by-the-numbers, mid-weight modern Barossa Shiraz. 17/20, 90/100