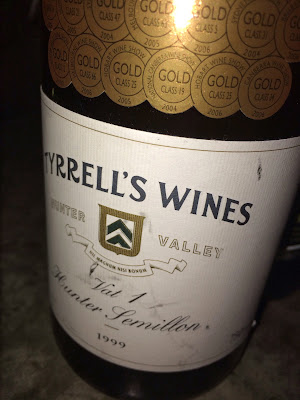 Last night was the National Liquor News tasting panel Christmas party and, as befitting a good Christmas party, some very solid vino made an appearance.
It was these two Aussie icons, however, that stuck out amongst the various bibs and bobs, notable as much for their vastly contrasting deliciousness than anything else…
Tyrrell’s Vat 1 Semillon 1999 (Hunter Valley, NSW) 10.3%
I’ve been lucky to enjoy a few of these ’99 Vat 1 Semillons over time and every year it seems to become more convincing. Perhaps the only challenge here is the corks, which are notoriously unkind to Hunter Semillon in the late 90s.
This particular bottle came directly from the Tyrrell’s museum and was in absolutely beautiful shape, the cork absolutely A1. Exciting start…
It smells great too, with that wonderful, whipped butter delicate creamy richness on the nose that this wine has always been known for, the fullness almost suggesting that this wine was barrel fermented on full lees. In fact, it’s not until you taste this Semillon ithat it becomes obvious that this is an unoaked Semillon and not an ultra fine Chardonnay, the acidity taut and powerful and green apple citrussy.
The ultimate effect of this acid/richness contrast is a wine of both complexity and drinkability, with a freshness and effortlessness that is more easily compared to Grand Cru Chablis than anything else.
Stunning wine. World-class stunning.
Drink: 2013-2023+ (depending on what stage you prefer to drink your Hunter Sem. I like them less as ancient wines)
Score: 19/20, 96/100
Would I buy it? I’m saddened by the thought I have none of this wine left. Have plenty of 05 though..

Has this famous wine gone ‘off the boil’? Or has the benchmark for Barossan Shiraz caught up and overtaken ‘Basket Press’? I personally have been less moved by recent vintages, and this isn’t the wine to change my mind…
The biggest issue here is the lack of freshness, the nose carrying every sign of a wine unduly influenced by the record 2008 vintage heatwave. Heavy, scorched and missing its fruit, the figs and overcooked blackberry jam nose is backed by a palate that is all ‘front end’ – rich and thick but quickly attenuated and finishing with a lump of dull alcohol warmth.
I can’t help but think that 2008 was not the year to be making a wine produced from grower fruit (as Basket Press is famously known for) purely as it was a vintage where you really wanted to be out there in your own vineyard with a hands-on role –  choosing picking dates, dropping shrivelled bunches and giving a level of control you just don’t get from a network of growers.
The net result is a wine that does not live up to its reputation – a heavy, lifeless Shiraz that is a $25 wine, no the $150 it sells for.
Drink: 2013-2020
Score: 16/20, 87/100
Would I buy it? No. Couldnt agree with you more on the Rockford. This is a wine that has fallen from grace in recent years, but maybe my palate has moved on.

02 Rockford was similar .. 03 better than 02 and good as a young wine (I didn't cellar either of my 2 bottles). Haven't bought any recently but did buy some 2010 Rockford Cabernet which is very good.

You can still get the 99 Vat 1 in plenty of places – you have to pay though! Kemeny's have it for around 78 which is the cheapest I've seen anywhere. Costco were around 82