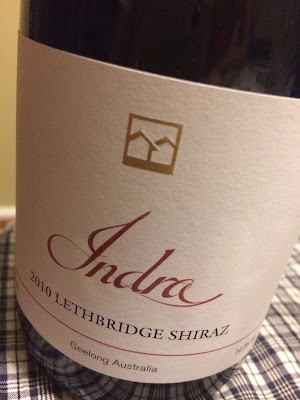 I did a double-take when I saw the price of this. $95? Woah. That’s some serious dollars, even for as celebrated a producer as Lethbridge. Lucky this is damn good.

It’s difficult to not think about Cote Rotie really, such is the nose of ham, black pepper, deep red fruit, sausage meat and a whiff of the farmyard (the good part of the farmyard – possibly with cows). It smells… right. The Viognier (2%) is not noticeable, neither the 100% new oak. There’s a masculinity to this red which sets it apart from some other Geelong Shiraz, the leanings more towards Guigal ‘La Las’ than something more fragrant and pretty and Hermitage-esque. The tannins, too, are long, gritty and serious – serious enough for a $95 wine, with the tannic chew of something twice that amount.

Ultimately I approached this Lethbridge Shiraz with skepticism (again, $95 is not pocket change) but came away more than impressed. Would love to put this in a blind lineup with some Cote Rotie for I reckon this would be very competitive indeed. Damn good.