I’m back in Sydney now after the final few days of the Wirra Cycle Tour and must say that it seemed like a shame to be heading back from South Australia so quickly.

At this time of year the warm dry days (35C when I left on Sunday) and warm-but-not-hot (16C on Saturday evening) nights make McLaren Vale a very liveable part of the world. Throw in some truly stunning beaches, great hills to cycle up plus the odd smart wine and it’s genuinely hard to leave.

Anyway, these are a few more photos from Adelaide/McLaren Vale and the Adelaide Hills last week, including several pics from the Tour Down Under cycle race (another attraction in Radelaide in January). 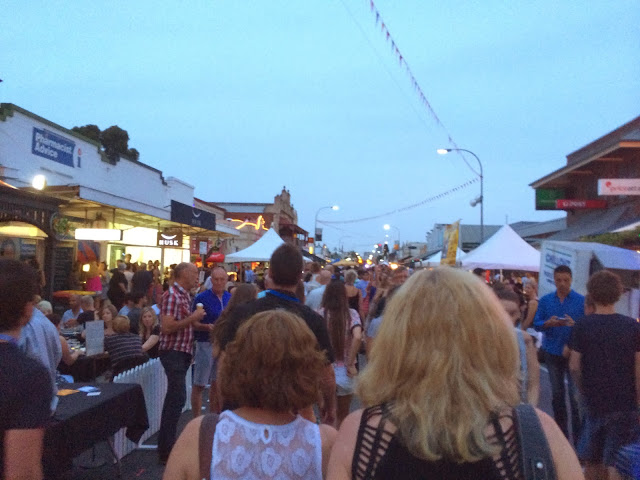 Pictured above is a snap from the Unley Gourmet Gala, an annual street fair that sees brewers, winemakers, eateries and more take over the main street of Unley in Southern Adelaide. It actually rained a few drops during the evening which is absolutely unheard-of in January! 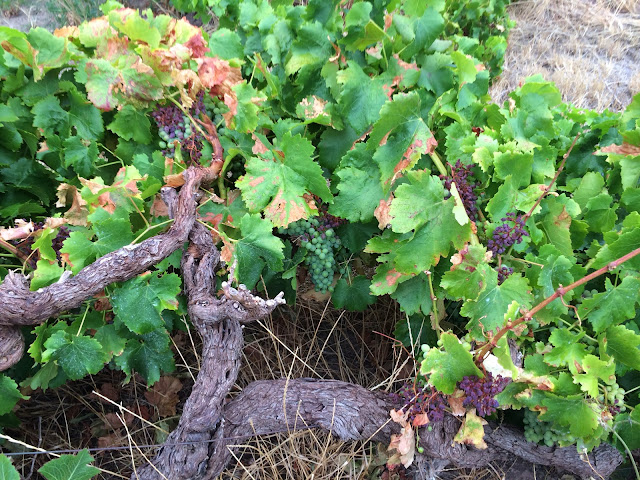 Almost 100 year-old Grenache vines on McMurtrie Road in McLaren Vale. As you can see this has a little sunburn after the 40C temps 10 days ago but otherwise looking very healthy (and only just starting to go through veraison). Dry-grown, low-yielding and famously hardy, the fruit from these old ‘bushies’ goes into Wirra Wirra’s Absconder Grenache – no wonder the ’12 is so good. 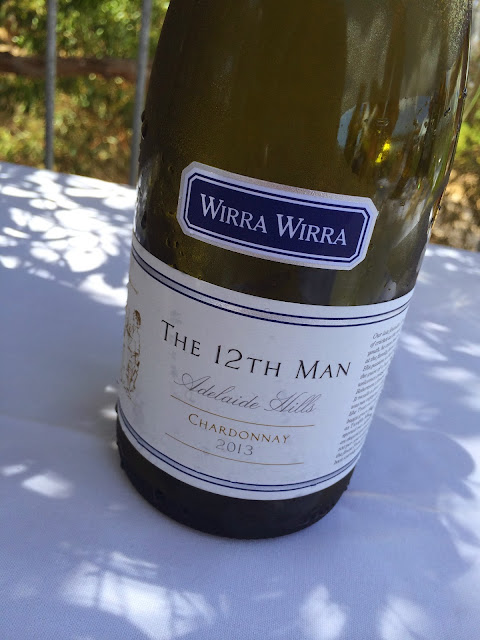 Speaking of Wirra Wirra the new 2013 12th Man Chardonnay was also let out to play over the week, and after tasting it back-to-back against the 2012 I’ve got no qualms about giving it the thumbs up. The 2012 is perhaps a finer wine, but this expressive and open ’13 is drinking nicely already. 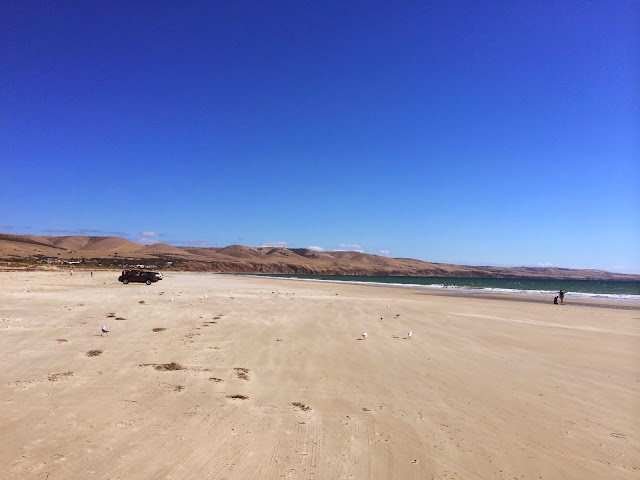 A section of Aldinga Beach known as Silver Sands, with the Willunga escarpment pictured in the background. Stunning vista and a beach that was notably good for beach cricket – flat and uncrowded. 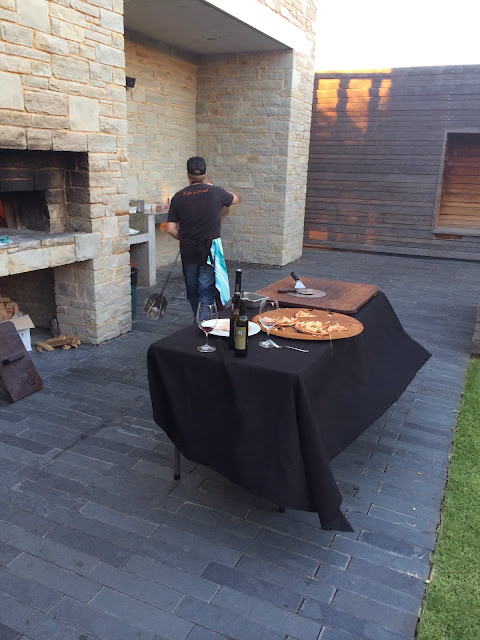 Few cellar doors can match the setup at Primo Estate – the inbuilt pizza oven and open courtyartd making it one very entertainment-friendly spot. I drank more than a little of the recent disgorgement of the Joseph red (again) and can confirm that it really is magnificent. Know what the secret is to that wine? Several hundred bottles of leaking old Australian reds from Langtons were tipped into the Joseph master blend recently, including a large volume of 30-40 year old Penfolds Grange. 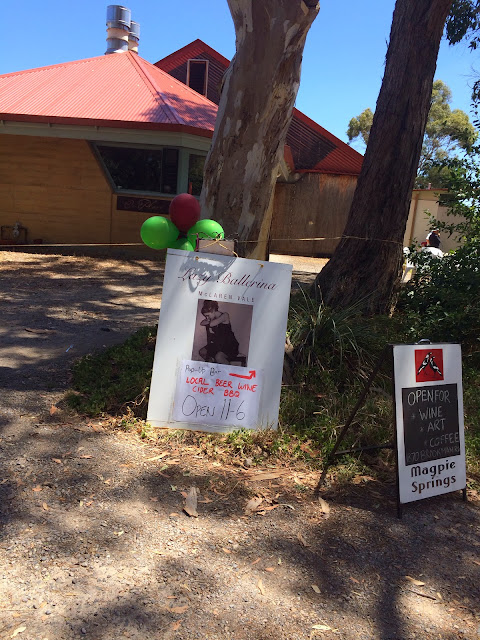 Renowned McLaren Vale viticulturist and producer James Hook managed to get in on the Tour Down Under action, bringing together Rusty Mutt wines and his own label Lazy Ballerina (along with local cider and such) in a pop-up wine bar on a part of the Tour Down Under circuit. With the Old Willunga Hill stage finishing line less than 100m away, this was a very smart tactical move to introduce people to the brand (and sell some wine). 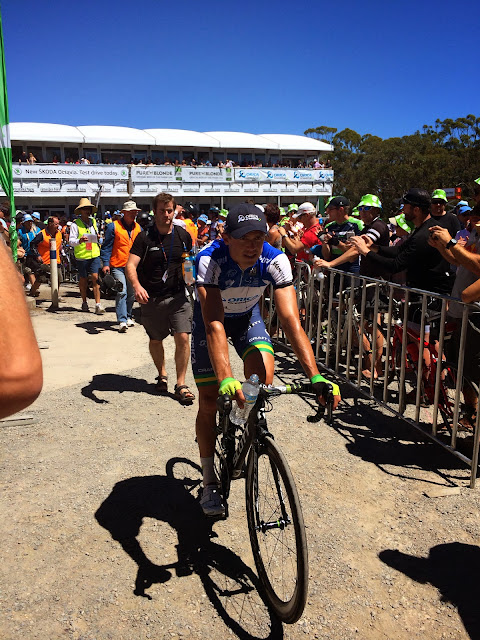 Speaking of the Tour Down Under Old Willunga Hill stage, this pic was taken of Simon Gerrans shortly after retaking the ochre leaders jersey. Gerro looks surprisingly grumpy considering he’s just wrestled back the race lead. Probably becaue he now has to go and wee into a cup. 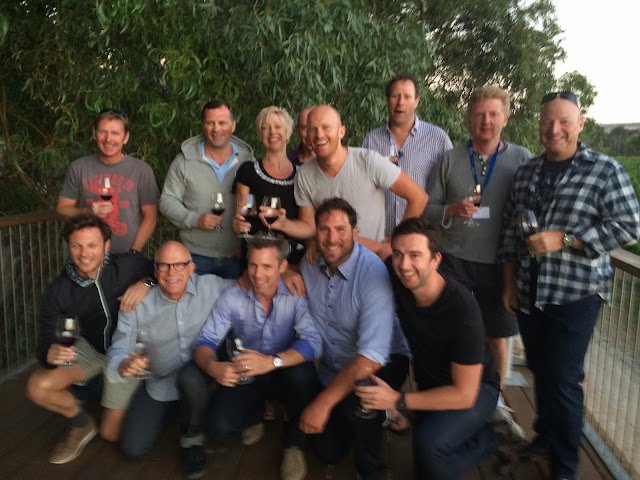 The WirraCycleTour crew in full blurry glory. I’m in the middle of the shot looking like I hadn’t shaved all week. Probably because I hadn’t…
I travelled to McLaren Vale as a guest of several local wineries (including Wirra Wirra and Primo Estate). I would have been in the Vale last weekend anyway – McLaren Vale is a genuinely great spot for any wine loving cyclist.