On selling out and well made Sauv: Stoneleigh Sauvignon Blanc 2013 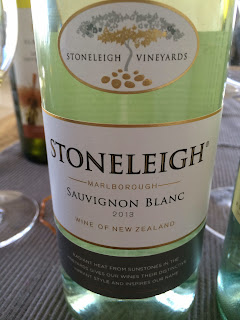 In the scheme of Australian wine, admitting to liking this large production Marlborough Sauvignon Blanc is akin to signing up as a brand ambassador for Philip Morris. Or becoming the face of a genital warts advertising campaign (‘if it changes colour, see your doctor!’).

It is, according to many Australian producers/critics et al., reputation destroying.

Obviously I’m being dramatic, but the domestic anti Kiwi Sauv Blanc sentiment is rather palpable at present, to the point where anyone who gives a Stoneleigh Sauv Blanc a plug is automatically assumed by fellow wine critics to have sold out (or is clearly drunk at a junket).

Still, if I’m going to be accused of selling out than at least I can be confident I apparently sold out over a well-made wine, for this 2013 Stoneleigh is exactly what you’d want in a $20 Sauv. It smells of classic early noughties (the heyday for this label) Marlborough Sauv, with lifted passionfruit and broadbean aromatics in a supercharged style (some clever aromatic yeasts used here for sure).

That liveliness translates to the palate too, which is slightly sweet (4.8g/L apparently), juicy and driven by typically punchy acidity, a little short and rather tart perhaps but with no shortage of concentration.