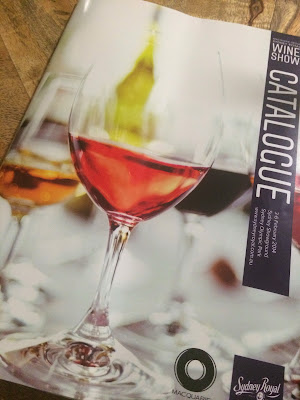 The 2014 Macquarie Group Sydney Wine Show results were officially announced on Thursday night, with this wine scribe present at the trophy presentation dinner in my official role of ‘chief pusher of the benefits of drinking from wine show trophies’.

Sadly no one drunk wine out of said trophies, though I worked hard on Jonathan Holgate from Tertini. His Riesling trophy looked particularly suitable for drinking from (it was a huge metal cup).

What the evening (and the WCA Sydney Wine Show Trophy Winners lunch on Friday) did allow was a really good look at some of the trophy winning wines, which is always an interesting exercise (if just to gauge wine trends). Again Treasury Wine Estates were the biggest winners, with the resurgent Rosemount and ever-present Wolf Blass wineries picking up a whole bagful of trophies, along with Seppelt and Coldstream Hills…

Beyond the wines, we were also treated to a notably thoughtful pair of speeches from outgoing Wine Show Chairman Iain Riggs and Guest Judge Lisa Perrotti-Brown, with both articulating some points of view that were hard to argue against.

For Riggsy, that entailed a delightfully blunt ribbing of the big company winemakers in the room, imploring them to support the regional and capital city wine shows instead of the ‘quasi-regional’ shows that lack the same level of professional rigour. Cairns, Rutherglen and Cowra Wine Shows – you’re clearly in the Riggs firing line.

Similarly, she used her Friday speech to talk about the importance of umbrella wines – the blue-chip Australian wines that our nation, noting again how good Australian Chardonnay has become. No arguments on that count from me…

As for the wines? As ever – and tasting a few of the winners reminded me of this – it’s hard to agree with all of the judges decisions for the top, yet no doubting that there is a reason why each wine won. That means certain wines which looked particularly aromatic (which would make them standout in lineup) or especially varietal (again, helps them be noticed) appear to have taken out the trophies (not that there is anything necessarily wrong with that either).

Tasted – some of the trophy winners:

Succinctly varietal. Really rather intense. Chalk and pear. A sour and defined palate. Perhaps too sour and overtly varietal but excellent palate definition. I’m not a fan per se but can appreciate the intensity. 17/20, 90/100
Mcguigan Bin 9000 Semillon 2007 (Trophy: Best Semillon)
Lovely gentle lemon toast. Plenty of lanolin. A little light on the intensity but genuine stuff. I would happily drink plenty of this (and had a few glasses on the night). 17.8/20, 92/100
Coldstream Hills Reserve Chardonnay 2011 (Trophy: Best State Wine Show Wine of the last 12 months)

Sexy oak. Spicy sexy new oak. Lots of oak on palate and spicy as hell. Is it too much of an oak drawn wine? Not sure. Gee it’s delicious though. Excellent, mealy flavours and superstar acidity. Delicious now and with even more to come. 18.3/20, 93/100+

Arras Grand Vintage 2004 (Trophy: Best Sparkling White Wine)
Biscuity and quite yeast developed nose. Lovely. Quite gentle palate doesn’t have that Champagne chalk but the complexity is superb. Soft acid but joyously complex and even a little bit funky. Such deliciousness! Gold medal and I’d drink this over plenty of average vintage Champagne. 18.5/20, 94/100
Tertini Riesling 2013 (Trophy: Best Riesling)
Lemon and acid phenolics. So backwards. Compact and perhaps too dry but certainly powerful and grapefruity. Real intensity but perhaps not overly affable. I’d prefer to drink this in about 3 years time. Much promise. 17.5/20, 91/100+

Lobethal Road Shiraz 2012 (3 Trophies: Best Shiraz, Best Red Wine, Wine of Show)
Perfume red berry menthol with a suggestion of Viognier in there too. Slightly slutty fruit before bitter finish. Pleasant. Flashy oak really lifts this up. Mid-weight and certainly a contemporary cool-clime Shiraz but not distinguished. Style first. Loses its shape through he finish which is a bit blanched and broad. 16.8/20, 89/100
Seppelt Drumborg Pinot Noir 2012 (Trophy: Best Pinot Noir)
Finally nails the ripeness this year. Quite a syrupy nose and certainly fuller and red fruit boozy to match the underlying herbalness. Almost Central Otago juicy weight. Some stem fragrance in there too. Warm alcohol. A surprisingly juicy red fruited wine but also has some sappy bitterness too. Clever. Enjoyable. 18/20, 93/100
Brown Brothers Cellar Door Release Montepulciano 2013 (Trophy: Best Other Red Varietal)
Lovely purple fruit – clearly a juicy fruit driven young wine that won on the nose. Palate is simple and displays a short young vine tutti-fruti nature. It’s ok but not trophy quality – closer to fruit juice than something more varietal and serious. 16/20, 87/100
Rosemount GSM 2012 (2 Trophies: Best Red Blend, Best Shiraz/Grenache/Mourvedre and blends)
Confected but entirely pure in its Grenachey expression. Fruit is a bit playdoh and over filtered/polished. Very pleasant though. I just wish it was a bit more feral and less ultra-smooth. Can understand why it wins awards though – technically it is flawless. 17.5/20, 91/100

Nicely done! I haven't had a chance to taste many of these and from the looks of the tasting notes, it looks like these wines are going to a be a treat! Hope to see some of these labels out of storage and onto the dining tables at some of the Inner West Sydney restaurants soon!