A very simple premise for tonight’s tastings – two South Australian Shiraz, both from 2012 and both retailing at circa $30. 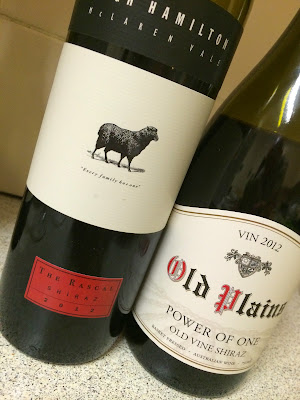 As befitting the reputation of the vintage (11/10 for many South Australian producers. Enthusiasm abounds) this pair of reds looked very strong. Impressively strong really given that $30 isn’t a helluva lot of money.

Better still these are two quite different wines – different enough to appeal to divergent drinkers methinks, and I’d recommend both (for very different reasons).

What a big, inky beast this is, carryingies that concentrated, licoricey blood plum richness that you often see from Shiraz sourced from the warmer parts of McLaren Vale. Importantly, there is no hint of overripeness in this luscious, dense and licoricey red, although the alcohol does give a warm kick through the finish.

A big, concentrated ripe red (and proudly so), this bombastic wine may be just a little too heady for me to love, but no questioning that it offers a shedload of flavour for $30. Drink sooner rather than later and revel in the power! 17.5/20, 91/100.
Buy online: Hugh Hamilton website

The latest of Dom Torzi’s 2012 reds to hit the market and gee this is another affable, loveable beast.

Sourced from some forgotten old vineyards in what is now outer Adelaide suburbia, the key here is that smoothness of texture that all of Dom’s reds show. Much of that comes from great fruit, but ably supported by carefully coiffed vanilla oak which adds further layers of milk chocolate decadence to the whole packgae.

While the Hugh Hamilton wine wins you over with absolute force and extract, this wine is all about texture, the style sweeter and all together more rounded and voluptuous if not quite as intense.

Intriguingly, I don’t think you don’t really pick this as being from the ‘inferior’ Adelaide Plains until somewhere near the finish (which is just a bit rugged). In fact, if I had of told you this was a Barossa Valley floor Shiraz I don’t think you’d bat an eyelid (I wouldn’t).

Leveraging to good effect the joy of ripe old vine Shiraz in a very good year, this is about the best advertisement for Adelaide Plains wines that I can think of. 18/20, 93/100
Buy online: Old Plains website