Sometimes this wine writing gig has its upsides. Sure the money is almost mythical, the prospects limited, the hours long. Yet at least you get to eat and drink well.

Or at least that’s how I justify it… 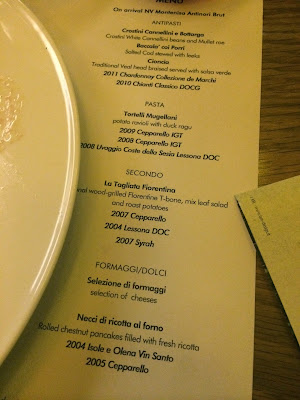 A recent dinner with Paolo de Marchi at Sydney’s Balla happily fell into the last category, providing the sort of food/wine/company combo that makes it all worthwhile. Now if only I can work out how to use wine to pay rent…

Who: Isole e Olena proprietor Paolo De Marchi, with the event arranged by Ian Cook from Five Way Cellars, in conjunction with The Star and Negociants (Australian importers of Isole e Olena). Steve Manfredi was on hand to talk through the food (and confess his love for Paolo’s wines).

Crowd: Mainly consumers, who had all paid to attend the dinner. I was a glad freeloader.

Food: The ravioli and bistecca, in particular, were big highlights – seriously good. Lovely ‘Tuscan inspired’ flavours on offer, which just made me want to go even more (Chianti is on the cards for August, Bring it).

Story: This is Paolo’s 38th year of winemaking. he ‘hopes to be able to relax a little bit soon’.

He really doesn’t seem to be slowing down though. Rather, he’s very keen to push the wines of his son, sourced from the original family farm in northern Piedmont.

Said vineyard is located in the foothills of the alps ‘between Val d’Osta and the big lakes’ and is actually a forgotten gem, as Paolo explained:
‘This was an extremely important region and then it changed. 98% of vineyards lost to phylloxera and never replanted. Small properties and a textile industry that was flourishing meant pragmatic vignerons forgot about vineyards and didn’t replant. Now less than 1000 hectares across 12 appellations.’

There has also been considerable change in Chianti, where the main estate winery is located, with a huge shift in the nature of land use. Much of it happened very quickly too, as Paolo described:.

The change came on the back of a cultural evolution too, with wine evolving from ‘food for the peasant’ to a legitimate business focus.

While Paolo loves to talk about Piedmont, his lifelong focus ultimately remains rooted in Tuscany:

‘My story is understanding Chianti’
The wines:

My expectations were high (and I have some Cepparello in the cellar) and the wines delivered. These are charismatic and genuine wines reflective of their maker and region. I didn’t quite love the Nebbiolo pair but I can fully appreciate the style and mode. A personal preference thing perhaps.

These wines were all drunk over dinner (ie with food and at a leisurely pace). Background notes in italics…

Quite a heavy oak nose. Lotsa oak. Full barrel flavours and a sulphide funk. Maybe a bit obvious, replate with firm oak tannins (which is not much fun in a wine like this) but has length and a fine acid backbone.  17.5/20, 91/100
Isole e Olena Chianti Classico DOCG 2010 (Chianti Classico, Italy) $38
This includes a little Syrah, planted to help give something to the blend.
What a delicious wine this is. An ad for Chianti if ever there was one. It doesn’t have the complexity of Cepparello or even the power of similar Brunellos. But gee this is pure and beautiful – all red fruit, minimal oak and sandy tannins. Energy and juiciness in a savoury form. I came back to this at the end of the tasting and no doubting it’s a simpler beast in this company, but a beautiful one all the same. Buy buy. 17.8/20, 92/100
Isole e Olena Cepparello Toscana IGT 2009 (Tuscany, Italy) $100
100% Sangiovese, sourced from the estate vineyards in the northern part of Chianti Classico. Aged in French oak barrels. According to Paolo ‘Sangiovese is not forgiving when you make mistakes’. The secret to the success of this wine is all about the best Sangiovese fruit.
Oak swathed all over the nose. Initially I thought this was too oaky, the oak obfuscating the palate. Thankfully I left my glass and came back to a point where the oak seems to meld into the quite black fruit. It’s still a flashy wine – maybe not flashy for Tuscan reds, but flashy for 100% Sangiovese – though clearly the sandy tannins are all Sangio.

Ultimately I loved this wine. It feels so ageless and intense and lively – a wine that will continue to be seductive for decades. The only question remains whether some wildness has been lost at the expense of such oaky polish? I still can’t mark it down, regardless. Superstar Sangio. 18.7/20, 95/100

Isole e Olena Cepparello Toscana IGT 2008 (Tuscany, Italy) $100
Already open and ready to drink, the extra evolution of this warm year wine really helping the drinkability. There is all sorts of welcome meaty, blackened chilly and pulled pork smoky wildness here that perhaps makes it a better wine than the 2009. Very Italianate regardless. Meat and meat. Slow cooked ragu. Expressive. I love the open and grandiose Italianate wildness, though clearly it just seems a little uneven compared to the 09 – the acid and tannins a little less fine (though this seems much less oak framed). Ultimately this is another top Sangiovese and a very fine drink now. 18.5/20, 94/100
Proprietà Sperino Uvaggio Coste Della Sesia Lessona DOC 2008 (Piedmont, Italy) $45
Sourced from Paolo’s son Luca’s vineyard in Lessona. A blend of Nebbiolo with the earlier ripening Vespolina and Croatina.

Licoricey. Highly toned. Slightly vegetal. All front palate and sucks up through the finish. Misses the grandiose of Barolo. Lots of acid. Quite wild. Has fennel and pepper intrigue, but as a drink this isn’t quite long enough. Warm finish. Not quite even enough and needs ripeness to fill the holes. Still rather pretty and full of intrigue. 16.8/20, 89/100

Proprietà Sperino Lessona DOC 2005 (Piedmont, Italy) $100
Straight Nebbiolo and treated more like a traditional Barolo, with a long natural ferment and extensive barrel ageing in a variety of barrels and big oak. 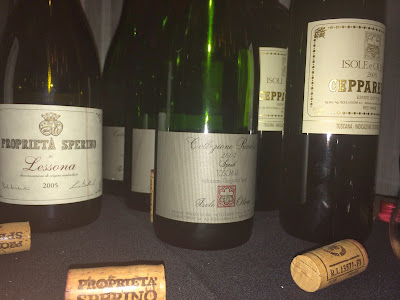 Syrupy at first – pushing the ripeness. Ferns and undergrowth as well as blackness sounds like real marginal fruit. The brackish palate plays the black spice card and teeters on the brink of ovrer-ripeness. Long lived and furry palate starts full but tightens up into slighly astringent tannins. It feels like two wines really – a really rich soft red attempting to be a dry and dusty Nebbiolo. You just want for more phenolic ripeness here ultimately. Still, there is some refreshment and it will live forever. 17/20, 90/100
Isole e Olena Cepparello Toscana IGT 2007 (Tuscany, Italy) $100
From a very warm vintage in Tuscany.
Choc mocha oak. Milky and leafy with a warm hearted core. Feels a little forward and stunted in this company. Coffee. Malt. Cocoa pops. Flat and open and warm. Length not quite of this class.
Isole e Olena Collezione de Marchi Syrah Toscana IGT 2007 (Tuscany, Italy) $90
Leaf and mulch and black pepper. A little horsey, overlaid with cocoa powder. Flirts with underripeness before the oak kicks forward and scores this a big dry dark choc goal. Has intensity but a little bound in itself and oak. Probably worth an each way bet here as it has genuine character and will likely only get better. 17.7/20, 92/100
Isole e Olena Cepparello Toscana IGT 2005 (Tuscany, Italy) $100
In cork. ‘We tasted two bottles and people understand why we use Screwcap’.

A bit of VA and menthol but rather meaty and firm. All bacony secondary. Smoky and little fruit compared to wines around it. Quite bitter and gruff. Is it a wonderful drink? Rather hard and smoky. The ordinary bottle? I see flashes of goodness, but otherwise it looks off key. 16/20, 87/100

Isole e Olena Vin Santo Chianti Classico 2004 (Tusany, Italy) $90
‘The lazy winemakers wine’. The quite neutral fruit (Malvesia and Trebbino) for this is air dried, put in small barrels on used lees then sealed for 7 years. VA can be a big problems with this style as Paolo wryly notes ‘Sometimes Vin Santo likes to be a sibling of balsamic vinegar’. Apparently this was a very warm year and a simple wine initially, made complex with some of the wildest barrels (hence the volatility).
Honey, golden syrup and spirit. Ditto on the palate which has Muscat like levels of sweetness rounded off with caramel oak. Bold but beautiful. How can you not love this ? Perhaps it is too simple? Hard to knock otherwise. 18/20, 93/100