Legendary wines from the Hardys cellar back to the 30s

Legendary wines from the Hardy’s cellar back to the 30s 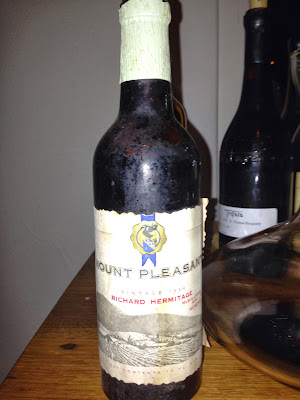 If you’ve ever read James Halliday’s ‘Great Tastings’ articles you’re probably familiar with the story I’m about to tell.

It involves wines that are beyond rare. Rather, they’re museum pieces – treasured bottles with storied reputations and pricetags that you don’t want to ask about out. More than that, this collection of wines tells the story of Hardy’s via a wine narrative – the people, the vineyards, the places, all expressed in vinous form.

As ever, wines like these remind you that great Australian wines live much longer than expected. Our wine industry may be labelled as ‘new world’, but our wine history is much older and richer than most people think.

These amazing beauties where drunk (not tasted. Drunk. Important distinction) a few months back at a dinner held at the superb Fino restaurant in Willunga (near McLaren Vale). They were opened as part of the launch of the new William Hardy’s range, with Bill Hardy amongst those on hand to tell the stories.

I didn’t score anything here as it felt irreverent to do so – too many curios for that measure. Still, I can’t stress enough how beautiful wines like those oldies from the 30s were. Profoundly youthful even.

Unfortunately, some of these were one-offs, but in most cases several bottles were opened with the best poured at dinner. I just wish I had of taken more photos as my notes really don’t do any of these wines justice.

Anyway, here is my few impressions regardless…

Made by Geoff Hardy.
Golden and honeyed but varietal nose – still with a lift of peach and lychee. Palate is short and just hanging on to what is left of the golden pineapple fruit. Curio only.
Mcwilliam’s O’Shea Traminer 1943
An O’Shea era white produced from with fruit swapped with Roger Warren at Hardys. Bottled at Tintara, purchased for use in Old Castle Riesling. O’Shea believed this was one of the best white wines he made.
Fully bronzed and oxidative, yet not fetid – clearly spent plenty some time in barrel which saved it. Really oxidative and flor like creamy weight. But short. I was convinced this was a sherry given the flor characters. Has intrigue and no shortage of history. Past it’s best, but there is magic here.
Hardys Eileen Hardy Chardonnay 1999
55 Yarra Valley, 30% Tasmania, 15% Adelaide Hills
Toasty and pineapple with butterscotch development filling out the palate. Fully developed and with a toffee edge that is quite attractive. Really in a pretty good place, if hardly a fresh wine.
Hardys Eileen Hardy Chardonnay 2005
Tom Newton believes this is the best Eileen Chardonnay to date.
Fig cream flavour. Still looking vibrant and rather a bit of solids weight though the palate. Lovely weight in a Montrachet mould. Really clever and dense with plenty of acid. Delicious. Gold medal quality.
Reynell ‘Burgundy’ 1939 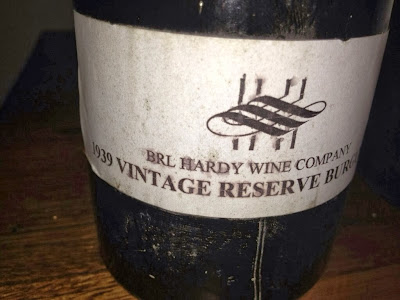 McLaren Vale and Reynella Shiraz produced by Bill Gillard.
Dusty nose with a little tomato bush. There is still some fruit in there amongst that terracotta dust and iron filing. More than a curio with some sweetened red meat and red dirt. Some sweetness to hang on to. Genuinely drinkable – almost unntaurally juicy, if all baked earth. Woah.
St Thomas Burgundy 1958
A 100% Shiraz blend of Stanley Dry Red, Reynella Burgundy, Tulloch and Elliots Dry Red, Elliots HV Herm. 6250 gallons produced. The equivalent of an entry level red at the time.
Heavily madeirised red earth and acid has raised up. Falling away fast. An oddity for its lack of energy.
Hardys Reserve Bin Burgundy C354 1961
Hunter Valley, McLaren Vale and Barossa fruit. 100% Shiraz. Produced by Dick Heath.
Light and quite bitter earth. Alcohol noticeable through the finish. Fair but a slightly clumsy, bulky wine. Dark and earthy. With iron tannins. Rather chocolatey too. Certainly some character.
McWilliams Richard Hermitage 1954
100% Shiraz. Two half bottles opened and they were astoundingly fresh. No one had even known that half bottles of this wine existed.
Drink in that Hunter action! Red earth and beautifully resolved sweetness. Unequivocally Hunter and limpid soft, with a muscat like ridge of sweetness of cherry spice. Long and effortless in its silk and red dirt. Magical. Superb. This is 50 years old? Wow.
Hardys Eileen Hardy Shiraz Special Bin 80 1970 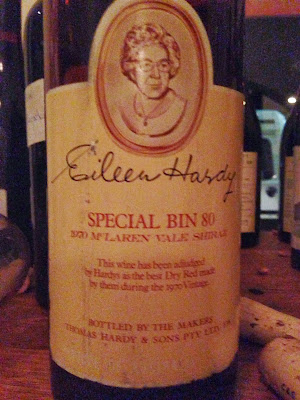 100% McLaren Vale Shiraz. The first ever Eileen Hardy Shiraz!
Immediately recognisable as Vale Shiraz. Dark chocolate and a reduced beef stock concentration. Plenty of tannins but silky finish. Black fruit and concentration. Big alcohol and chocolate but resolved. Such power! A bulky, inky wine in context and a marvel for its age. Wow. Perhaps a little simple in its fruit. But concentrated
Hardys ‘B’ Cabernet 1954
A fraction madierised. Looks fully resolved but falls away in this context. Bitter tannins to finish but shortish. Life but dark and without the silk and sweetness.
Hardys Cabernet C111 1959
A blend of Reynella, Coonawarra, McLaren Vale fruit with some Tahbilk Cabernet. 1870 gallons produced. Made by Dick Heath. Roger Warren
Ooh. There is still some varietal fruit in here! Perhaps something of a donut palate but there remains a hint of cedar. Perhaps a bit compact and treacled. But wow some life!
Chateau Tahbilk Cabernet 1965
Purchased in barrel by Hardys.
Wow. Still much Cabernet juiciness. Lovely tannic richness too. Earth and hung meat. Super length and power if maybe a bit of a sneaky wine. Actually it really is – just builds and builds through a warm and robust finish. Still so fresh! Dark and still quite blackish in colour.
Reynell Vintage Port 1936
Very sweet and concentrated richness still. Quite treacled through the middle but ethereal in its texture with a silkiness to the finish. Magically resolved and drier than the rest. Special fortified.
Hardys Vintage Port 1945
A quite big tannic wine! Is this really a 45! Blackness and quite sweet with tar acidity. Looks less composed than the 36 but still such length and power. Black muscat blackness but with tannins and less syrup. interesting wines, thanks for that!

What a great selection – and at Fino too! Not jealous, much.. 😉