When I first entered the wine industry, 15 odd years ago, Chardonnay’s popularity had already peaked. It was still the most consumed white wine mind you, but the change had begun, with tastes moving away from Chardy and into more aromatic/lighter bodied white wines.

Of course that shift did result in the (arguably misguided) Verdelho boom of the late 90s/early noughties (poor Verdelho. Always the chubby bridesmaid), but arguably we ended up with a much more diverse white wine drinking diet because of it (save for the overt dominance of Sauv Blanc).

The main casualty of this taste evolution, however, was the rich, oak (and more oak) driven Chardonnays of the 90s, with wines like Rosemounts Oakasaurus (aka Roxburgh) shuffled into an appropriately full bodied retirement.

While this was a good move in some ways (Chardonnay does not need 100% new oak), the swift abandonment of a mainstream full and ‘buttery’ Chardonnay style left a hole in the market. All those drinkers who prefer softer, more rounded wines were not going to be content drinking dry and sharply defined Sauvignon Blanc, with the Chardonnay styles themselves also becoming drier, leaner and less generous too.

Enter the Hunter Valley vignerons. Despite being regularly viewed more as tourism operators than winemakers, what some of the region’s canny winemakers realised was that the full flavoured style of Hunter Valley Chardonnay had a place after all. Sure, it did require some tinkering (like careful oak treatment and MLF retardation), but what producers like Scarborough, Tyrrell’s, Mistletoe, De Iuliis know is that many people, myself included, prefer Chardonnay to be rich and ripe, the leanings more towards Montrachet than unwooded Chardonnay.

The results of this regional realisation are plain to see. Mistletoe continues to pick up bags of silverware for their Reserve Chardonnay. Tyrrell’s have an ever expanding range of single vineyard Chardonnay, all built full and proudly Hunteriffic. Lake’s Folly Chardonnay now sells out as quick as it did back in the 90s.

If you had to pick just one wine to showcase the value of a ‘buttery’ (which is how such styles are often referred to as) Hunter Chardy, however, it would be this Scarborough Yellow Label Chardonnay. 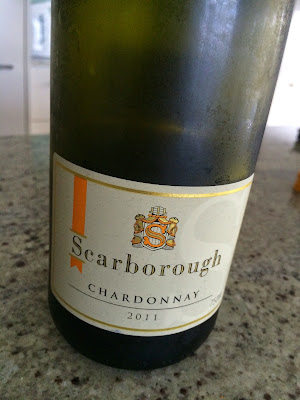 Back in the late 90s, when the ABC (Anything But Chardonnay) movement first gathered steam, it seemed to the Scarborough family that their Chardonnay would fall out of fashion. Indeed they started producing a ‘Blue Label’ Chardonnay that was built leaner with less oak and more delicacy in response.

This new 2011 Scarborough Yellow Label Chardonnay is a perfect example of the ‘house style’ too. Produced from a warm vintage in the Hunter (more of a Shiraz vintage than Semillon) it has that ‘buttery’ richness that so many drinkers still love. – a combination of golden, ‘peaches and cream’ fruit and oak, over a palate that is full, low on acid and utterly mouthfilling with its honeyed richness, all without looking sweet or lifeless.

Sure, it’s not minerally, it’s not finely delineated, it’s even a little bulky. But for anyone who can see the charm of Chardonnay with guts, it is a very natural go-to recommendation.