Boom! The 2010 Guigal La Landonne hits you like a freight train, all brutish tannins and huge flavours, the wine almost mocking you for daring to open it so young.
Still, although it is the least approachable Shiraz/Syrah I’ve had in some time, there remains enough magic about it that makes you want to drink it – not just stick it in the cellar. You’re compelled to drink it even, just to revel in that massive structure and perfect lines.
But gee its expensive. Circa $700/bottle expensive. So expensive that you need to step back and have a rethink about what’s in front of you in the glass – is it really that good, or is it simply a case of getting caught up in the emotion of tasting a famous wine, from a famous maker, in a famous vintage?
I say yes. Actually, if I had enough money I’d be stocking up on all three of these new 2010 La La’s, for they’re seriously brilliant wines.
Of course I can’t afford any of them – I was only gifted the opportunity to try these three wines thanks to the Working With Wine Fellowship; a biannual education programme (run by renowned wine importer Negociants Australia) that famously offers Australian ‘wine professionals’ the chance to taste the great wines of the world in a set of seminars led by industry experts. 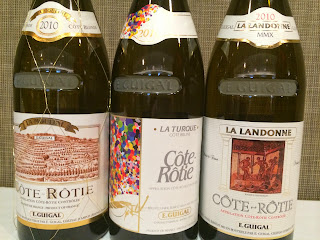 This Guigal trio was the centrepiece of Tuesday’s first seminar of the 2014 Fellowship, the tasting including a spread of CNdP; a line up of Hermitage; plus a few great Australian Shiraz. Better still, Aussie wine luminaries including Tim Kirk (Clonakilla); Louisa Rose (Yalumba), Iain Riggs (Brokenwood) and John Duval, plus Phillipe Guigal (Guigal) on hand to talk us through the wines.

In other words, great wines and smart people to talk about it. An awesome day.

All of these were tasted non blind relatively quickly. Extra background bits in italics. Scoring proved more challenging than expected…

Guigal La Mouline 2010
89% Syrah, 11% Viognier. From what is the oldest vineyard in Cote Rotie, with a single hectare of vines, including some plantings dating back to the 1890s. 42 months in oak.
Is it wrong to call this pretty? Very fragrant, with ham, dandelion and some sort of expensive perfume on the nose, though with less force and much more openness than either of the other two, complete with just a hint of herbs. It’s almost gentle on the palate, mouth filling and open and very pretty – such an unforced red. You could smash a bottle of this already! Such fragrance and beauty for what could be a monsterous wine unexpected really. Silky palate and quite grainy tannins let this flow beautifully. Near perfect. Actually, some warm alcohol is the only filip. Beautiful. 19/20, 96/100

Guigal La Turque 2010
93% Syrah, 7% Viognier, Sourced from the Cote Brune with circa 35 year old vines. 42 months in oak.
Certainly less fragrant and more masculine than the La Mouline. It seems a little more subdued, more tannins and more grip. Still, there is a long, rare roast beef chocolatey richness here. More mystery than the La Mouline yet without the fragrance – riper and fuller. Cocoa on the nose, the palate channels kidney and some meaty wildness, the Viognier giving late flesh. Maybe more masculine, less smashable than the La Mouline, but the tannins are more mature and longer. Exceptional depth and power but perhaps a little less sexy and perfect compared to the La Mouline. Bloody hard to choose between them. 18.9/20, 96/100

Guigal La Landonne 2010
100% Syrah. 100% whole bunch. 42 months in oak. ‘A little more than normal produced in 2010’ according to Phillipe. 2500 bottles produced.
Massive wine. Has a huge nose of enveloping stems that is quite unlike the other Cote Roties – it’s almost Australian in its brawniness. Such extract here – it almost laughs at you, a big beefy red with chocolate flavours and heroic, live-for-50-years tannins. In the longer term this will be the winner of this trio but untouchable now. Unbelievable tannins. Superstar tannins. Aggressive tannins perhaps. But woah. Magnificent wine. Benchmark resetting wine. 19.2/20, 97/100

Someone has to do it 🙂