Where do you stand on the scoring of unfinished wines (barrel and tank samples)?
Personally, I’ve always shied away from giving a definitive score for an unfinished wine, purely as it could then taste entirely different in bottle (compared to what it was a pre-release), which makes the scores redundant. In other words, too much chance/trust that you’re getting a finished result makes such scoring something of a guessing game. 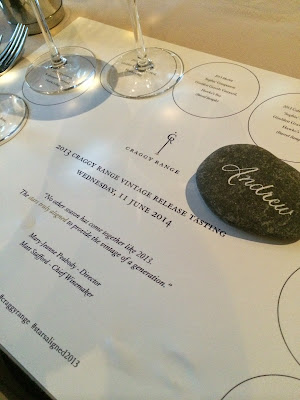 Yet a tasting tonight of a swathe of 2013 Craggy Range ‘Sophia’ component barrel samples (which were very good) gave me reason to question such an approach. Should I instead follow the lead of en primeur critics and post an indicative score (which may be subject to change post bottling)? Does anyone care that much about when a score is given anyway?
Obviously this deadly boring topic (scoring) has already discussed ad nauseam, but I’m still interested in other perspectives. Your thoughts?
Scores or not, there was no hiding the excitement of Craggy Range Chief Winemaker Matt Stafford when talking about the 2013 vintage tonight. In many spots throughout NZ (and particularly in Hawkes Bay), 2013 is being hailed as a ‘vintage of a generation’, with the long warm summer near perfect for ripening the Bordeaux varieties (and Syrah) in particular.
Amongst the barrel samples shown this evening was four, distinctively different varietal parcels that go into making Craggy Range’s Sophia right blank blend.
All drawn from Craggy’s Gimblett Gravel vineyard there was a Merlot (plush, classically round though fell away towards the finish); Cabernet Sauvignon (intensely varietal and massively tannic. Borderline ripe in a classic wine though crying out for some mid palate flesh); Cabernet Franc (pretty, slightly herbal. All about the aromatics) and a Petit Verdot (revelatory. No nose but deep, dry and back-palate focused with supreme length and chew).
Separately these four looked a bit one dimensional, though together the blend ‘worked’ (though my own blend with more Petit Verdot was arguably better than the straight Sophia), making for a wine that was as illustrative of the joy of blending as it was the glory of the vintage.
Admittedly I wasn’t quite as enamoured with some of the Craggy Range white wines (the 2013 Te Muna Riesling looked particularly shapeless and middling), there is no questioning that, if these results are anything to go by, 2013 is going to be a superstar year for Hawkes Bay reds.
Maybe I should just follow Suckling’s lead and say ‘I’m 96 points on the vintage?’