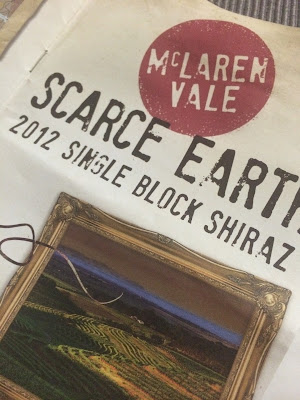 It doesn’t seem to matter how high quality the wines are, how good the food is on offer or even how convenient the location is, they are perennially poorly attended.
Some may point to the proliferation of events spreading attendees out thinly, Others may suggest that with traditional independent retail struggling to compete with homogenous supermarket liquor, that there are less buyers on the ground. Others still may point out that attending events is a luxury when business is ‘so tough’.
Whatever it is, I’m often ashamed at the turnout for high-quality events – and the launch of the Scarce Earth wines was a classic example.
Admittedly I’m close to the project (best to start here first), having visited the Vale the past two years to try the new release wines (read about it here and here) and kicked the dirt with the makers in the process. But surely many can see that here was a golden opportunity to get taste many of McLaren Vale’s finest wines, from one of its finest vintages, all in one place.
So why the crap turnout? Is McLaren Vale Shiraz that uncool? Was there not enough publicity? Or did no one understand the gravitas of having this ultra-limited lineup of reds in one spot (this is the first time that Scarce Earth has gone on the road after all)?
Whatever it was it was shameful. I felt ashamed to walk into a room with more winemakers than tasters. To see someone like Chester Osborn propped up behind a table laden with plenty of Shiraz, a load of soil samples, a mascot and several maps was a site to be seen. Yet no one was there to see it.
Of course I wasn’t there over the whole event, and indeed the masterclass I went to was well attended, but still the turnout was frustrating. What’s more, this is not an isolated incident either, with all distributors, wineries and importers constantly bewildered at how such good tastings can be so unpopular with the trade, yet instant sellouts with the public (witness the annual NZ Wine in a Glass tastings for evidence – where the trade side is a ghost town, while the public event is a ticketed, wildly popular scrum).
Anyway, enough griping about the trade, lets talk about the wines. What better time to pen this piece actually, given that the 2014 Scarce Earth wines officially go on sale today.
Better still, this crop of 2012 McLaren Vale Shiraz is, to my tastes at least, the most enjoyable yet. The evenness of a warm and ripe year has delivered an evenness in the wines that is more than welcome, particularly after the challenges of last year.
Even better, what we see in 2012 is a more effective display of what the Scarce Earth project is meant to accentuate – sub-regional expression. Sure, the sub-regional expression in McLaren Vale is still more about where you are in the region rather than the earth itself (there is several weeks of ripening between north and south after all), but this year at least displays plenty of stylistic divergence.
I had the pleasure of looking at a selection of this year’s new releases in something approaching a blind tasting, largely as I covered up the list of the wines presented during the masterclass. It worked, too, though again the wines I preferred fit a stylistic pattern that has seen me often prefer certain makers year in and year out. I’m a creature of habit, clearly.
As you can see, however, the best wines from this 2014 Scarce Earth project really do show the cream of McLaren Vale shiraz in a great year.

Pretty and very modern – a very flashy and quite substantial wine in a trophy leaning mode. Lots of energy here if much more alcohol. Almost porty in its glycerol sweetness. Just a little warm to be sublime. 17.5/20, 91/100

Elliot Road, McLaren vale. Kurrajong Formation. 6 hectares planted in 1999. 155m elevation. Harvest date 24th February. $35.
Anise and mint – a very different beast. Grainy tannins too. Lots of mint and without quite the generosity of the wines around it. Quite sleek though. An interesting inclusion – way too minty for mine. 17/20, 90/100

Chapel Hill The Chosen Block House Block Shiraz 2012
1 Chapel Hill Road, McLaren Vale. Tapley Hill Formation. 1 hectare planted in 1977. 164m elevation. Harvest date 17th February. $65. Intriguingly this is is always my favourite Chapel Hill wine and I also gave this my highest score tasting it blind at the 2010 release tasting!
Quite unconventional and attractive boysenberry with some animal hide. A really quite complex wine in this lineup – great length too. Maybe a little divisive but delicious. 18.7/20, 95/100

Shottesbrooke Blewitt Springs Single Vineyard Shiraz 2012
Schuller Road, Blewitt Springs. North Maslin & South Maslin Sands. 2 hectares planted in 2000. 195m elevation. Harvest date 14th March. $45. Black pepper and black olive – a fragrant and quite pretty wine. Delicate and lots of spice. Seriously chewy and pooey. A little unusual in that pooeyness. I like the fragrance but gee its an unusual wine. Lovely structure though, which drags me over the line. 17.7/20, 92/100

A quite subtle wine – really savoury and fragrant. Has wonderful form though – long and quite settled. Everything in its right place, just needing time to unveil. Big plus sign here. 18.3/20, 93/100+

Raspberry and mint. Quite perfumed and pretty. Has that fragrant zing too it. Lighter, meatier tannins too – maybe even a little ham. I see the sweetness a little here, but gee it’s luscious. 17.8/20, 92/100
Mr Riggs Shiraz 2012
3 Idle Lane, Kangarilla. North Maslin & South Maslin Sands. 2 hectares planted in 1999. 260m elevation. Harvest date 14th March. $50. Little wonder that this looked Adelaide Hills-esque – this vineyard is up in one of the cooler parts of the Vale.
The most seriously hammy, Adelaide Hills-esque style of the lot. Chewy and dry. Cornas like! Feels very unconventional. It needs 12 months to settle but certainly high quality and serious intriguing. I’d drink this in a heartbeat – complexity abounds. 18.5/20, 94/100

Hey Andrew.
Nice piece and plenty to think about here.
You raise some good questions and the golden answer just doesn't exist regrettably. I too have been to some trade tastings, and yes, it's a ghost town. The same reasons keep cropping up – it's my day off so I can't make, my boss won't give me time off, I didn't know it was on, the timing is poor, etc.
It certainly makes more sense to do such a tasting en mass rather than expecting winemakers to lug their gear around town to all and sundry and pull out the same spiel.
For the punters though, wine is an excuse to get out and socialise so no surprise they sell out such events. Having so much top gear at the one venue also helps.
I've probably thrown up more questions than answers?

That you have Steve!

More than once I've been at an empty trade tasting and thought it would probably be better just to invite trade for free to a public event. That way it becomes a win-win for the producer.

Or is that even harder to manage I wonder?

I think that's a sensible idea. It will certainly save the winemakers/reps a lot of time.
In the end, those from the trade who want to attend such events will. And they are probably the places producers would invest more of their time and efforts into

Hi Andrew,
I have been waiting for the retail release of the 2012 Mr.Riggs shiraz '12 in Melbourne and it appears that it is now available.
However, Jeremy Oliver speaks of "fractionally baked fruit smoothed over by smoked oyster like american oak influences".
Did you record anything remotely like this in your tasting notes ?