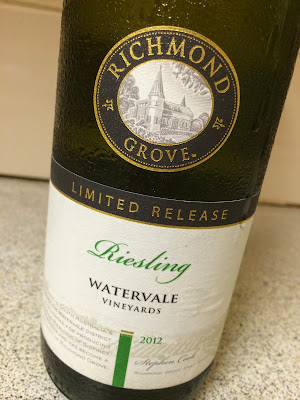 
Ahh memories. I can happily remember drinking much of this back in the early noughties just because it was definitive Clare Riesling at a very fair price.

Flash forward a decade and what was a stalwart has been forgotten – to the point where, curiously, the 2012 is the current vintage. I’m not sure whether that is an intentional move, or simply a lag in demand, but it does this wine no favours.

Indeed this is stuck in the development hole, the primary fruit a little faded, the tertiary development yet to start. There’s plenty of that buzzy, limey classic Watervale character, but it’s in no-mans land for drinking.

Ultimately there is potential here, but I personally wouldn’t be drinking it for another 2-3 years at least – which begs the question of why to release it now? Odd…

Would I buy it? Hmm. Not yet. But in a few more years? It may prove to be a bargain…
Buy online: Dan Murphys, Grays Online