A top Hardys Shiraz that I stuffed up 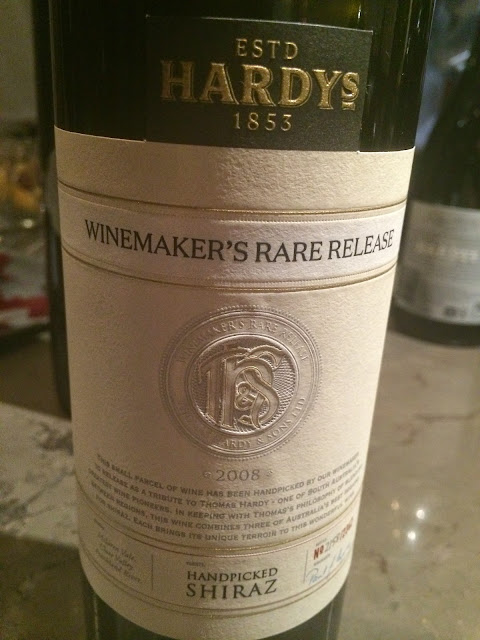 I’m willing to admit it – I got this wine wrong.
Last night was the launch of the latest super premium wines from Hardy’s, with new and old vintages of Eileen Hardy Chardonnay and Pinot, plus Thomas Hardy Cabernet, all flowing freely.
This Winemaker’s Rare Release Shiraz, however, stole the show. It was the options wine, which means it was presented blind to the room and then we had to guess what it was via a game of elimination.
Stupidly, I played the man and not the wine, deciding that this was South Australian – because Hardys is South Australian – even though there was something in this that didn’t taste quite like classical South Australian Shiraz (and Hardys are known for cross state blending).
Quite rightly I lost, as the wine was identified as a multi regional blend of McLaren Vale, Clare Valley and Frankland River Shiraz fruit, coupled together in a ‘best of the vintage’ Shiraz blend.
To be honest, I didn’t even pick this as a 2008, as it looked much younger than that with none of the cooked fruit obviousness that dogs so many 08 Clare and McLaren Vale reds.
Such youthfulness and vibrance makes this a very smart wine, with the black olive and earthy coolness of Frankland River fruit giving punctuation and structure to the more robust South Australian juice, making for a clever, ripe-yet-taught, ‘best of both worlds’ full bodied Shiraz of power and drive.
I don’t even think this is available locally (or what the price is) but given that it comfortably outclassed all the collected Eileen Hardy and Thomas Hardy reds in the room, I’d be making a serious beeline if you find some.
Oh and if you see any of the new 2013 Hardys Eileen Hardy Chardonnay then give it a whirl too – all Tassie fruit, it’s one of the best Eileens in ages.
Source: Dinner
Tasted: September 2014
Drink: 2014-2030
Score: 18.5/20, 94/100
Would I buy it? If the price was right, absolutely.