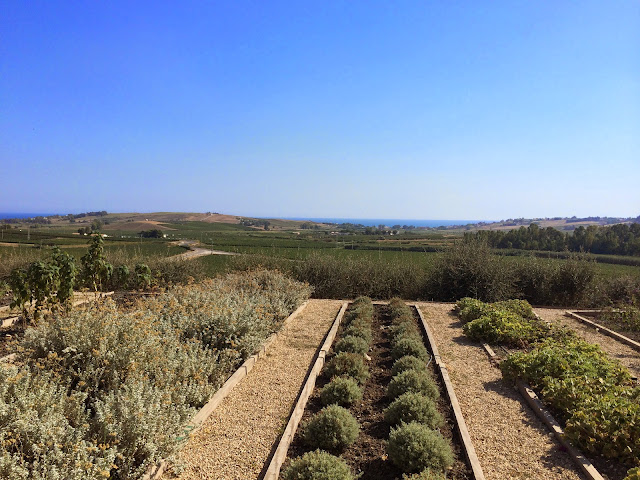 That about sums up the vista on the southern Sicily coast this week, where the relentlessly warm ‘bluebird’ days roll on as if they’ll never end.
It’s a contrasting landscape, ultimately, with the arid yellow, rolling collina dotted with almost unrealistic lurid green vegetation and set against a backdrop of brilliant, sparkling blue sea.
There’s an oddity about where I’m staying, Planeta Estate’s La Foresteria at Menfi, too, as the wines are rather bluntly commercial and samey for such a luxury resort (but more on that later).
What isn’t hard to see is the beauty of this parched part of Italy, the experience topped off with beaches that are cleaner and less cluttered by Europe’s summer tourist masses than so many other Mediterranean beachside locations (largely Italians here it seems).

Equally enticing is the local cuisine – heavy with clams, swordfish and sardine, the generosity and simplicity utterly addictive.

As for local wines – well, Marsala is not all that far from here and Pantelleria is a ferry ride away, marking sweet wines the most interesting in this part of Sicily. Nero d’Avola is what’s being planted locally though, as the world’s thirst for rich, good value, full flavoured Sicilian Nero only increases.

Again, the contradiction though- Nero doesn’t work at all with local fish-heavy food, making it just as contradictory as the sight I saw yesterday – a farmer in his clapped out tractor, holding up a long line of traffic heading to the beach… Wonderful, bewildering China: Pictures from my week at Concours Mondial
May 17, 2018

Lucky guy ! I went there in May, it was outstanding holidays !

I've read that Moscato di Noto can be also great… and made not far the Southern coast..

Moscato both sweet and dry is the hero around here for sure.