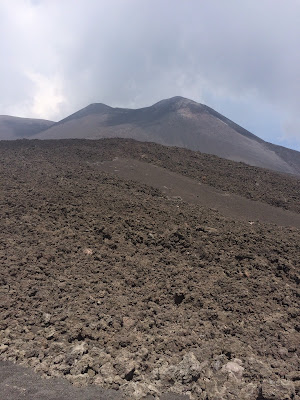 Ever arrive home after a holiday and find that you beat your postcards home?

Well that’s me, except this postcard I never quite got around to sending.

Now that I’m back – and under strict doctor’s orders to avoid alcohol and fatty/spicy food (very confused about what to eat and drink now) – it’s probably a great time to finish off this little note.

So anyway, this postcard comes the slopes of Mt Etna – the huge, steaming active volcano that dominates the eastern skylines of what is mainland Europe’s largest island, Sicily.
I barely scratched the surface of what was going on during my brief visit, but its not hard to see the divergent personalities of what has to be one of the more interesting wine regions to visit in Italy.

What makes the divergence more pronounced is the terroir itself – the vineyards are planted on black volcanic rock that was spewed up, in some cases, only a century ago, the landscape changing whenever Etna decides to do some renovations with lava.

Etna has its own microclimates too, with the vineyards planted from basically the foothills at 450m altitude right up to the lower slopes of the volcano proper at 1100m. In turn there is a spectrum of styles explored, ranging from light and crisp Carricante and Catarratto based Etna Bianco right through to powerful and Pinot-like Nerello Mascalese/Nerello Cappuccio blends.

Of all the wines tried it was these two that illustrated the personalities best.

Tenuta delle Terra Nerre Cuvée Delle Vigne Niche Etna Bianco 2011 12.5%, Cork
100% Carricante from a range of old vines dotted all over the northern side of the mountain. This is fermented in old barrels for roughly 12 months and spends 6 months in bottle before release. 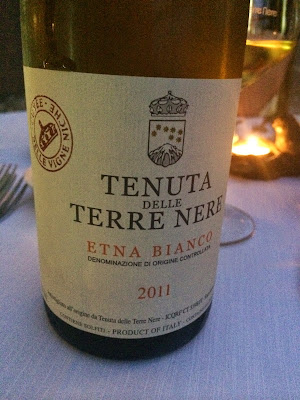 A delicate, lemon cream and waxy wine, the palate just touched with oak but otherwise fresh and crystal pure. There’s a coolness here that defies the Sicily heat, the palate dry and clean and vital, with just a little waxy vanilla to suggest it had ever seen a barrel. Intriguing marzipan and wheat beer meets lemon flavours too.

Delicious long and quite pure, it’s not ridiculously complex but the balance and intensity is seriously unquestioned. Reminds me a little of a good, waxy Chenin (and bloody good value at circa €15). 18/20, 93/100


Benanti Nerello Mascalese 2002 14%, Cork
From one of more renowned names of Etna, this was interesting if purely for a window into how Nerello Mascelese ages,

If anything this reminds me of an older Hunter Pinot, the nose and palate heavy with that defining red earth character. There’s some wonderful black cherry fruit through the middle and surprising tannins to finish, again giving it a sort of grunty Pinot expression. Really quite tertiary now, this is again much lighter and more fluid than the Sicilian mode – and about the best mid weight red meat wine on the island.  17.5/20, 91/100