The latest intriguing red from Between Five Bells 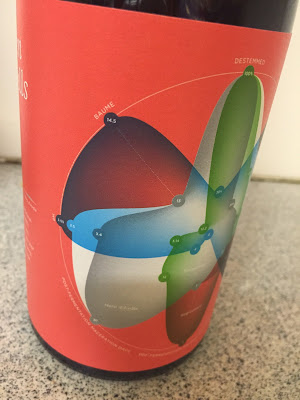 The Between Five Bells label is the only wine label that I’ve ever got lost in.

Like a Where’s Wally of the wine world, nothing quite beats the intriguing infographic labels of Between Five Bells (B5B), which cover off leagues of production and wine information utilising graphics alone.

Beyond just data and cool labels, what makes this wine – and indeed everything from B5B – interesting is just how much experimentation goes into every bottle.

This 2013 red blend, for instance, is a mix of Shiraz with a little Sangiovese plus hatfuls of Negroamaro and Nero d’Avola. But it’s not any old Shiraz blend – just have a read of this excerpt from the winemaking notes ‘…we filled a small steel tank with skins of other ferments, (Negro/Nero, some other stuff), and added one-third whole bunch Shiraz from the Mt Duneed B5B vineyard, (2.2ha). We topped the other two-thirds with the remaining de-stemmed Shiraz’.

Having spent numerous nights drinking with B5B chief David Fesq I can totally understand the reason his wines are so unconventional – a man not afraid to question the orthodoxy. Importantly, the B5B wines have a drinkability about them that belie the natural-leaning, ‘alternative’ production – and this 2013 Red is the best example yet.

Despite being Shiraz dominant, the whole fruit salad of red grapes in this is evident from nose alone, with balsamic, tea leaves and golden syrup. There’s a blackness this year not seen in other B5B reds, the dominance of black pepper and luncheon meat Geelong Shiraz character defining this nicely.

It finishes perhaps a little warm and sweet fruited, but also quite complex and alive – no fiddling here with acid or tannin additions, just grape juice fermented in old puncheons.

Admittedly David is a mate, so there may well be bias about the quality in the bottle. Friend or not, I can’t help but enjoy the provocative nature of this minimally handled, yet still conventionally juicy, ‘Geelong-Shiraz-goes-to-southern-Italy’ style.

An interesting wine indeed with complexities far above other generic wines aged in old oak. Aside from the compelling nose, and once on the palate, I couldn't help but notice the bitterness right though to the back palate (which I believe most of it would have been derived from the small tank of skins and some from the stalks from the whole bunch shiraz). I found the bitterness to be intrusive detracting from what otherwise would be a superb wine – hence won't be attractive for the masses. Your thoughts?

Bitterness is a funny thing. Quite often its a positive in small doses, but other times even a little is too much (and I often find real 'whole bunchy' pinot too bitter). All personal preference naturally. In the scheme of things it's astringency that is not a good thing (and often a sign of unripe fruit, bad tannins management) and probably where I'd draw the line. Did it become astringent?

The question with a wine like this is whether it was ever intended to be a wine for the masses? I'd wager no, in which case the bitterness is probably less of an issue.