2013 Tolpuddle range with a superb ring-in 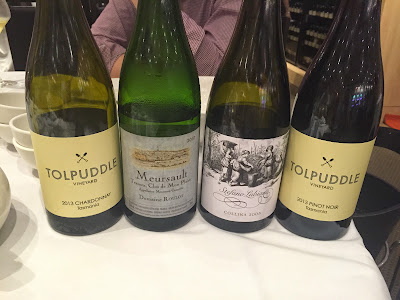 I’m in the midst of finishing of a major uni essay at the moment, putting the final touches on a study looking at stated alcohol by volume ‘statements’ on wine labels vs actual ABV.

It’s been interesting looking at the variations (or relative lack of) and the reason for inaccuracies of labels, but it does mean that blog posts have slowed down in the meantime. I’ll be back on board by the end of the week, and if anyone wants a copy of the study let me know (it’s probably a bit dry for posting on here but I’ll put it up on scribd or something for those interested).

In the meantime, these new Tolpuddle releases looked very nice the other night at Sydney’s Golden Century, even though I foolishly decided to then drink Martinis for several hours afterwards. That hurt.

No doubt that this duo is a strong followup to the inaugural 2012 Tolpuddle releases, though my favourites are a little reversed. Would be interesting to see the Chardonnay by itself and not next to a blistering Burgundy though as it looked positively anaemic next to the wildly rich and full Roulot.

The only thing working against this is time. Water clear. Lots of acid this year – less malo than ’12 and it looks sharply defined. Subdued, grapefruit nose. Grapefruit palate with edges of lemon and vanilla. Surprised by the acid really – it looks ultra dry in this context. Lovely, long palate balances delicate fruit with a little mid-palate richness to fill things out. Definitely fuller through the middle than the 2012 but not quite the perfection. Still very nice. 18.2/20, 93/100+
Domaine Roulot Tessons, Clos du Mon Plaisir Mersault 2010 (Mersault, France)
The quintessential wild Mersault. I love wines like this. Milk bottle sulphides in that Roulot/Coche style. Gritty acidity. So full and flowing yet punches through with magic acidity. Oscillates between custard pie rich leesiness and then dry figgy length. Yes. Perhaps not Grand Cru fruit weight but golly this has layers of glory. ‘Just’ a village wine but the complexity here and drinkability is exceptional. Can’t see it getting much better than this either. 18.8/20, 95/100

Stefano Lubiana Collina Chardonnay 2008 (Derwent River Valley, Tas)
I didn’t spend much time on this to be honest. A less than great bottle with a little ocidative nuttiness and some deadening toast. Probably not representative.

Tolpuddle Vineyard Pinot Noir 2013 (Coal River Valley, Tas) 12.5%
Celery, herbs and rhubarb meets redcurrant and cherry spice. This looks much riper and less stemmy than 2012, though still has a very lively palate. There’s a blackness and flesh this year that impresses greatly. Needs another year as perhaps a little lean now. But every time I came back to it this impressed with that sweet-fruited-but-vital style. Going to make friends easily. 18.5/20, 94/100