This article appeared in print earlier this year. Seems only right to reprint it here now and include the tasting notes from a few Houghton verticals too.

Oh, and a note – this was written for a ‘lifestyle’ mag, so the tone is a little different to the norm…

Firstly, a question – one that was asked of me recently, and I got completely wrong.
Namely, where do you think Australia’s third-oldest operating winery is located?

My first pick, naturally, was the Hunter Valley, which has a wine history dating back to the 1820s. Next guess was the Barossa (1840s) with Victoria’s Goulburn Valley an outside pick for good measure.

But all of those answers were incorrect.  In fact, Australia’s third-oldest operating winery is located in a seemingly unlikely, rather unfashionable part of the Australian wine world – Western Australia’s Swan Valley.

To be honest, I really should’ve known better than to forget about ‘The Swan’, as this powerhouse of WA wine production can trace its roots back to 1829. In fact, the Swan Valley region can not only lay claim to the third-oldest Australian winery but the second and sixth oldest too, with more old wineries in this underrated part of WA than there are miners in the Perth airport QANTAS club.

Speaking of underrated, the third-oldest winery itself, Houghton, seems to be perennially forgotten when Australian wine heritage is talked about, with Houghton known better for its sub $15 white wine – the famed Houghton’s White Burgundy (or White Classic as it is now called) – than anything else.

Just like the Swan Valley however, it is foolish to discount Houghton, for a closer look at some recent wine show results turns up the fact that it is amongst the most awarded wineries in Australia. More to the point, Houghton also picks up more trophies and gold medals for Cabernet Sauvignon than nearly anyone else in the nation, even though few people would ever think mention Houghton when they’re talking about top Cabernets.

If ever there was a wine to ram home just how fine these top Houghton releases can be it is the superb, soon-to-be-released 2011 Houghton Jack Mann Cabernet Sauvignon. Crafted using grapes from one of Great Southern’s oldest vineyards (the Justin vineyard), it is a wine that demonstrates what can be done when you have access to grapes all over WA. Jack Mann is a ‘cream of the crop’ wine that deserves to count amongst Australia’s great reds, with enough intensity to see it live for 20 years or more no sweat.

There is only one challenge ahead for a wine like this – namely, it’s still a Houghton, which means that the public perception is more about cheap and cheerful rather than iconic superstars. In fact, even the bottle itself feels more like budget wine, the glass lighter and the lid flimsier than either the price tag or the quality of the wine deserves.

But maybe that is part of the equation – a reminder that the best wines come from humble origins. Humble origins… just like the Swan Valley.

Wines
These were written in a large lineup of Houghton wines served at the winery earlier this year. Notes are as scribbled on the day with extra bits in italics.

Houghton White Burgundy 2006 (Western Australia)
12%, pH 3.1, TA 6.2g/l. Cork
Still some green fruit in this – definitely a much tighter and more linear wine in the lineup. Perhaps a fraction too neutral? Has some delicious pear fruit in there with just a hint of cream bottle age. Freshness and some bottle age interest. Passion fruit finish. Quite fun. 17.5/20, 91/100

Houghton Wisdom Chardonnay 2005 (Pemberton, WA)
Lovely golden cashew but style. Has a lovely biscuity chard nose and very firm acidity. Maybe a little too firm? Regardless in wonderful shape for a 9 year old and refreshing to finish. Big accent on the acid twang. Thump! Delicious though. 18.5/20, 94/100

Houghton Thomas Yule Frankland River Shiraz 2011
Sourced from the Justin Vineyard. $74.99
White and black pepper interspersed with milk chocolate – aromatic and spicy. Cool, black fruit palate is smooth but deep and coffeed – fuller and richer than the norm for Frankland Shiraz. Deep and coffeed and rather delicious indeed – if a bit warm. 18.5/20, 94/100
Houghton Thomas Yule Shiraz 2012
Immediately more high toned if also a little more reductive after the 11, this looks pretty and fragrant – but I’m just a little less convinced by the red purple simpleness. More whole bunch apparently. Seems a bit more reticent than the 11 but also sexy too – stem tannin dryness. Revisit in 5. 18.2/20, 93/100+ 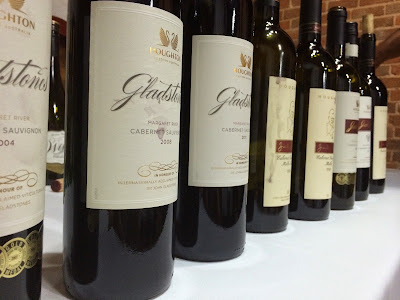 Forward, ripe, warm and almost caramelised – is this an 08 from south Oz? Definitely has fruit sweetness but some obvious raisining. Tannins not up to the task either. Still, long long finish gets this some kudos. The bitumen dead fruit subtracts and dries everything out. Alcohol a full stop. Long but hmmm. I’d like to revisit in 5 years. 17.5/20, 91/100

Houghton Gladstones Cabernet Sauvignon 2011 (Margaret River, WA)
13%, pH 3.51, TA 6.1
Much better. There’s some obvious oak on the nose of this – very modern oak though, plush and smooth. That palate is seamless too – cool and spicy. It’s still a puppy – and perhaps a little too youthful, but has a very good balance too it. Almost southern Victorian in its profile rather than gravelly Margs though. Nice even finish. This is a keeper. I’d like to see some more classic Margs characters as it’s perhaps too smooth, 18/20, 93/100+

Houghton Jack Mann 1999 (Great Southern, WA)
14.5%, pH 3.39, TA 6.65. 70/30 Cabernet/Malbec
Heroic wine. Concentrated but seems to be driven by alcohol and tannins. Huge tannins.  Sweet, mint and oak nose, palate looks like it’d teetering, holding onto oak richness but hot and heavy. Excellent intensity though – long leafy finish. If the alcohol could be reined in this would a star. 17.7/20, 92/100

Houghton Jack Mann 2011 (Great Southern, WA)
14% pH 3.56 TA 6.27. 96/3/1 Cabernet/Malbec/Shiraz.
Welcome back. Softer and pretty. A barrel sample-esque wine but such delicious drive. Harks back to the 94. I’m stealing Ralph Kyte-Powell’s quote ‘deceptively drinkable but will live for 20 years’. Fine tannins. Excellent drive. No acid. Back to the top tier, this is really natural and such length! 18.7

What a comparison this was. Same wine, two different closures. I didn’t score these as was to interested in the comparison. Served blind.

Houghton Jack Mann 2001 (Cork)
Rather forward and caramel. Treacly but with big alcohol. Warm year wine. Open and flashy though – hearty drink with a slightly earthy ferrous red finish. Meaty and a little raw. Warm year wine for sure.

Houghton Jack Mann 07 (Cork)
Slightly more vegetal wine. Closed too. Lots of acid in this puppy. Quite refined though – tight lines. Fresher than the last wine.