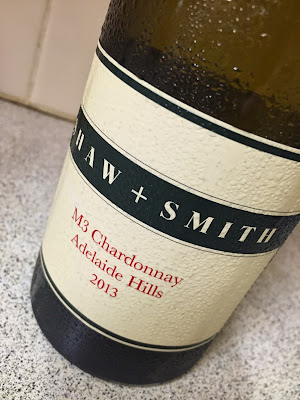 Tasted a few times now and it looks better every taste. A much more rounder style for M3, in line with the vintage, though countered with some early picking (hence the low alcohol).

There’s been a move towards a more delicate style of M3 in recent times, with less malo and an emphasis on minerality. Mostly it works, sometimes can be a bit lean – onwards and upwards regardless.

Despite the low alcohol this 2013 looks quite forward and ripe, the season’s warmth giving more openness and expression. There’s some sulphide funk fleshing things out too, which just makes this seems more sophisticated (given that cheap Chardonnay doesn’t tend to feature sulphide driven complexity). The palate looks perhaps a little lumpy, without the effortlessness of the 2012, but packing in lots of flavour. That acid looks a bit tart though, a counter-punch to the fruit.

Overall this is less convincing and more broadly set than the storming 2012, but there’s a sense of just how carefully made a wine this is. High quality Chardonnay from a mixed vintage for Hills whites.