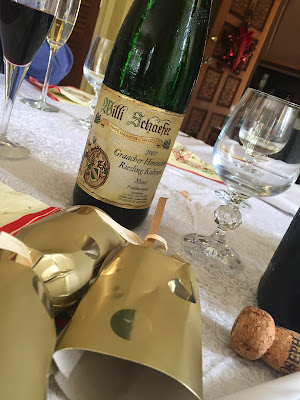 I love Christmas. Surely the greatest time of year for drinking and eating and basically an excellent excuse to bring out something tasty.

This year was a little more subdued at Graham HQ with a few notable drinkers absent, yet these four made it out to the table (I largely ended up drinking Bollinger, this and eleventy beers).

Bollinger NV
I know, I know, NV Champagne is a lottery. Yet this was disgorged mid last year by my reckoning (new bottle shape and this particular one was purchased last Christmas). Gee it was good too, carrying the autolysis and weight of classic Bollinger and acidity that never looks harsh. Still my go-to ‘big house’ (though Bollinger aren’t that big) NV in classic form. 17.7/20, 92/100

Willi Schaefer Graacher Himmelrich Riesling Kabinett 2007
Despite its seven years of age, this is still in the flush of youth, lightly honeyed with bottle age. It looked a little corky but no disguising the sweet lime tangerine fruit and gentle honeysuckle sweetness. A lovely ripe Kabinett, from a warm year, in a quite classic form. Would look great from a good bottle. NR
Capital Wines ‘The Black Rod’ Sparkling Shiraz 2011
3 years on lees. Interesting to look at this next to the Primo – it’s much lighter, and clearly more about site than blend. Smells juicy and peppery too with none of the latent creaminess that marks the Primo. Still, More like Canberra Shiraz with bubbles than a sparkling red. Could do with a little more intensity methinks, the wet and cool year robbing this of some weight. Still plenty of appeal. 16.8/20, 89/100
Leeuwin Estate Art Series Cabernet Sauvignon 2010
I had this in the decanter and sipped from it all day. Initially just dry, leafy and quite reserved firmly structured Margaret River Cabernet it opened up to reveal a warm and rustic heart, becoming progressively more bitter as it went along. A solid, leafy southern Margs style, but ultimately a little dry, warm and lacking in fruit generosity to be truly great. 17.5/20, 91/100